James Mangold's Johnny Cash biopic rests on the solid shoulders of Joaquin Phoenix ' and the impertinent twang of Reese Witherspoon. 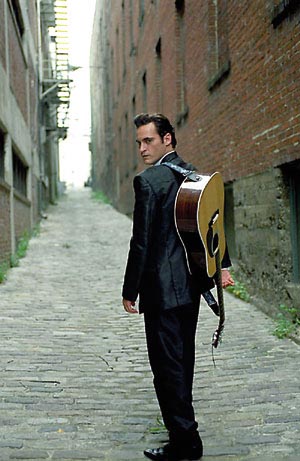 The world should weep once a day for the passing of Johnny Cash. The Man in Black was a rebel, a mystic, a prophet and an artist. It almost sounds clichéd to call him an American original, but that's just exactly what he was. There will never be anyone else like him, a breathtaking thought that infuses each frame of director James Mangold's Walk the Line.

Mangold, working from a script he co-wrote with Gill Dennis and based on the books The Man in Black and Cash: An Autobiography, opens the film at that iconic moment at Folsom Prison when Cash evolved from live entertainer to living legend. The raucous inmates cheer and whistle as a silent, stooped Cash takes a backstage breather. But it's only a taste of the greatness to come.

The film quickly flashes back to Cash's early story, a beginning marred by the death of his beloved older brother Jack (Lucas Till) and his father's subsequent rage and alienation (played with quiet ferocity by Robert Patrick). "God took the wrong son," he snarls. When first we see Joaquin Phoenix (Gladiator) as Cash, he is understandably timid, soft-spoken and unsure of himself. It is not until he manages to land an audition with legendary Sun Records producer Sam Phillips (Dallas Roberts) that the first sparks fly. In a stunning moment perfectly played by Phoenix, Cash seems to awaken, tossing aside a sleepy, reedy gospel song for an increasingly urgent, raw version of "Folsom Prison Blues."

It is the film's signature moment. Cash sang as though he'd actually been in prison; Mangold and Phoenix conspire to show us that, even if he never did hard time, Cash had experience with the circumstance and suffocation of imprisonment. As he sings faster and faster, Phoenix's eyes fill with anger and pride, years of hurt and disappointment; Phillips' eyes open wide. And just like that, he's on his way.

The bulk of the film focuses on Cash's lifelong love affair with June Carter (Reese Witherspoon). The Cash cognoscenti have long held that there was simply no other woman for Johnny, and Walk the Line is a valentine to that romantic notion. Witherspoon is a little too dolled up and a little too dressed down perhaps, but her June is appropriately irrepressible and fiery. She and Phoenix sing "Jackson" like they really mean it, a sweet reminder of the real couple's chemistry on stage.

At 2 hours and 15 minutes, the script goes on a little too long. Liberties are taken (and Cash's deep religious faiths are taken out). But Phoenix and Witherspoon deliver superb performances as two passionate, eccentric people nearly torn apart by his dark self-destruction and her angry obstinance. If Phoenix's performance as Cash is less showy than Jamie Foxx's in last year's Ray, in many ways it is more heartfelt and real.

The same can be said for the entire film. By the time the script brings us back around to Folsom, we begin to understand the singularity of Johnny Cash. It's a fitting treatment for a man who is finally free.