In Ridley Scott's 'Kingdom of Heaven,' neither side wins in the crusades for the Holy Land. 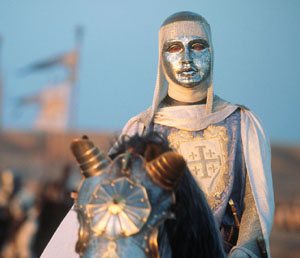 Jerusalem is a city continually destroyed by those who desperately want to save it. Coveted for centuries by the faithful of multiple religions, this holiest of holy places is the seat of a most unholy history. Far too often in its story, a passion for the places of God has given way to an orgy of power, violence and political primacy struggles. In too many sad, sad ways, the battles of the Crusades are not over and, tragically, perhaps never will be as long as men are men. And so the spiritual ideas of the true Jerusalem wither as zealots of every stripe bicker over bricks and mortar, ownership and exclusivity. The unhappy, uneasy existence of the city of David and Jesus and Muhammad remains the earthly inheritance of us all.

Director Ridley Scott's Kingdom of Heaven attempts to embrace this bloody birthright, his crusader's tale a lovely lamentation of the weary fight of faith against fanaticism and of ideals free of ideologies. Heaven sees what happens when men presume God's intentions and enact their folly with righteous fury. It also sees, however, what one man, adhering to simple truths, may accomplish in the midst of madness.

Heaven's hero is an unlikely one: a French blacksmith scorned by his village as cursed by God. Balian (Orlando Bloom) is a young widower. Because his wife committed suicide after the death of their child, her corpse is beheaded and buried at the crossroads. Hoping to drive Balian from the environs, the village priest sneers maliciously that everyone knows all suicides go to hell. When the blacksmith's grief turns to violence, his situation in the village further deteriorates. Salvation appears in the father Balian never knew, a crusader lord named Godfrey of Ibelin (Liam Neeson, in full mentor mode). Godfrey sets his son on the path to knighthood ' and forgiveness, for Balian believes that in Jerusalem he will be allowed to atone for his own sins, as well as those of his dead wife.

But the holy city is far from the sacred shrine or "the kingdom of conscience" that Balian imagines. Sitting under God's stars on the dusty hill of Calvary, the young knight still fails to hear His voice. Below him lies a seething city, its precarious peace with the surrounding Muslim peoples jeopardized by court intrigue and those who would make war against the wishes of the young, wise and leprous King Baldwin IV (Edward Norton). Baldwin's beautiful sister, Sibylla (Eva Green), is unhappily married to one of the court's biggest warmongers, Guy de Lusignan (Marton Csokas), a brutish Knight Templar who rightfully sees Balian as a rival for her ' and her brother's ' affections. Somewhere close, the Saracen general Saladin (Syrian actor and director Ghassan Massoud) rides herd on his own restless troops.

Trying his best to eschew the complications of court politics, Balian's first real act in the Holy Land is, tellingly, to dig a well ' inglorious hard work that pays dividends for his tenants, who include Muslims, Jews and Christians. Balian clings tenaciously to such "right action," speaking the truth and defending the defenseless whenever called upon. He does justice, loves mercy and walks humbly, even in the throes of what he sees as his divine abandonment. This is the heart of William Monahan's stellar script: that when we think nothing we do matters, then all that matters is what we choose to do. It's an odd script, in a way, because this idea is its most prominent, passionately drawn character; unconventionally, everything else ' love story, action, historicity, epic sweep ' serves only to support it.

As a director, Scott is extraordinarily in love with capturing the way movement looks, from the wind coming off the desert dunes to the surreal, savage action of hand-to-hand combat and the churning legs of a line of cavalry horses charging into battle. Heaven is beautiful, the snowy blues of France (and G.I. Jane) yielding to the blinding sunshine of an ancient desert city (and Gladiator). Massive battle sequences, with all the accoutrements of medieval war, punctuate the film with their chaotic choreography, a particular specialty of Scott's. His actors perform admirably, most notably Bloom, who solidly steps into a leading role; gone is the man-child of Troy whose mewling love affair with Helen launched a thousand yawns. Newcomer Eva Green (The Dreamers) singes the screen with her exotic eyes and regal strangeness. Massoud's enigmatic Saladin is a noble warrior, no mere straw Muslim set against the forces of Christendom.

Indeed, for a film about the Crusades, Scott and Monahan create a surprisingly ecumenical epic. The rightness of any particular party's cause is not the movie's purpose; the wrongness of men, cloaked as it sometimes is in the loftiest of ideals, is. This sadness that sits at the core of history also sits at the core of Scott's magnificent film. Rallying his troops to the defense of the helpless, Balian observes that, in the war for Jerusalem, "all have claim" and "none has claim." Asked the value of the city where so many have died, Saladin sagely replies, "Nothing â?¦ and everything."