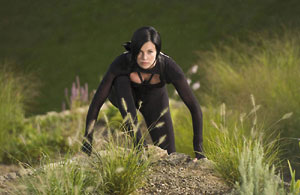 Animation film adaptations can be the worst. Mess with what the fans love and prepare to run for cover. The Internet lit up like a Christmas tree when blonde, wholesome Charlize Theron was cast as sci-fi sexpot Aeon Flux. If Flux's considerable fan base was not amused with Theron's casting, they ought to be equally unenthusiastic about their heroine's big-screen debut.

The central figure in creator Peter Chung's odd series that first appeared on MTV's Liquid Television back in the early '90s, Flux is probably one of the most popular animated characters you've never heard of. Aeon Flux, first appearing as near-silent shorts then eventually 30-minute episodes, was a futuristic, impressionistic contemplation of heavy topics such as cloning, morality and individuality. Episodes were weird; Chung had a strange concept of narrative continuity. Still, he managed to be at least interesting and provocative in the process.

Flux lives 400 years in the future, when the remaining human population ' those who survived "the virus" ' lives behind the impregnable walls of Bregna and is ruled by benevolent dictator Trevor Goodchild (Martin Csokas). But something's not right; the populace is plagued by a general malaise, a sorry state of affairs only heightened by the occasional, never-explained disappearances of fellow citizens. In response to this growing unease, a secret group of rebels, the Monicans, decides to fight the power; Flux is their greatest warrior. Sent to assassinate Goodchild, however, she flinches. Suddenly, she's not sure the Monicans are right. And so she dons skintight spandex and impossibly high heels and sets out to find the truth about Goodchild and Bregna and this suddenly weird world of hers.

The story isn't horrible, just slight. The script feels like the Cliff's Notes to a far more engaging film. Screenwriters Phil Hay and Matt Manfredi create only the barest of story outlines (not much more than the few sentences above), while the set, costume and production designers go wild ' making Flux a music video without the tunes, a video game without the adrenaline, a fashion show without the flashbulbs. Theron impressively performs her own trampoline-powered stunts and manages to inject a fair amount of emotion into Flux's search for the truth; Csokas (two Lord of the Rings films, XXX) works his Clive Owen cloneness for all its worth. But any chemistry these two create is swallowed by the film's narrative black hole.

With its Fifth Element tableaux and Matrix personal styles, Flux is almost always fun to look at, but its thin plot and lack of bite will be a terrible disappointment to anyone who loved the edgy sexiness of the MTV series. Animation film adaptations ' done this poorly ' really can be the worst.

Seeing Rent on the storied stage of the Nederlander Theatre in 1996, the year it won the Tony for Best Musical and the year its young creator suddenly and tragically died, was a revelation and a revolution. Here was a young, clever voice energetically shaking off the dismissive Generation X label to boldly reclaim Broadway from stuffy standards and tired crowd-pleasers. With its experimental theater vibe and its rock-like rhythms, Rent was electrifying. Its unflagging focus on the young and the restless of New York City seemed to reclaim a classic American art form in the name of the future. That was then; this is now.

Director Chris Columbus (the first two Harry Potter films, Mrs. Doubtfire) has two problems with his film version of the blockbuster musical: transition and timing. To his credit, he reassembles most of the amazingly talented original stage cast ' including Anthony Rapp, Adam Pascal, Jesse L. Martin, Idina Menzel and Wilson Jermaine Heredia ' but he fails to recreate the show's urgent sense of message.

Drawn (very) loosely from the Giacomo Puccini opera La Boheme, Rent chronicles the hard-luck lives of a handful of young artists, struggling to keep things both bohemian and bearable in New York's famed Alphabet City. A filmmaker (Rapp), a singer/songwriter (Pascal), a performance artist (Menzel), a stripper (Rosario Dawson), a drag queen (Heredia) ' all struggle to live and love in the midst of AIDS, poverty, crime and general urban angst and decay. Columbus, for once, doesn't do anything overtly wrong, sticking rather slavishly to the script. Larson's songs are tightly constructed, his witty lyrics only occasionally marred by a well-intentioned mawkish sentimentality. On the face of it, his material should stand up better than it does. So why doesn't Rent the movie work?

Somehow too much time has passed for Rent to seem relevant, but not enough time has passed for Rent to seem like a cultural snapshot of life in America at the end of the millennium. In the absence of a clear reason for existing now and without the raw energy and fire of live performance, Rent is boring and honestly kind of hokey. It is still a technically masterful musical, a frustrating hint at the depth of the late Larson's fledgling talent. But such a lackluster transition to another medium definitely makes you wonder if Rent might be spent.