CrossFit gyms are changing the face of fitness in Acadiana.

Patrick Conner is a hard-working, 34-year-old single dad to two kids who mean the world to him. After receiving the diagnosis of fatty liver disease in September 2012, he wondered if he would be around to see them grow up. "The doctor told me I needed to lose weight because I was unhealthy and this disease could threaten my life with cirrhosis of the liver," says Conner, who weighed in at 295 pounds at the time. He immediately headed to a traditional gym and tried dieting, but his hard work resulted in yo-yo weight loss. In December, he stepped foot into a local CrossFit. "My life was forever changed," he says.

After only three months, Conner now weighs 240 pounds and has reversed his fatty liver disease. In fact, his doctor has called him the poster-child for beating the disease as it takes many people years for this reversal. Without CrossFit, Conner believes he would still be overweight and sick.

I share Patrick's love for CrossFit. The daily physical challenges have not only helped lighten my load 30 pounds since last July but also opened doors in other aspects of my life. What began as a quest for physical health has also healed my spirit. When going to a gym, weight loss is expected, but I never thought I would gain so much confidence and just feel like a better person overall.

How could stepping outside of a comfort zone of "dread-mills" and a traditional gym setting lead to all this?

People see CrossFit as a craze that will fade like the sweat from my brow. A growing sport defined as "constantly varied, high intensity, functional movement," CrossFit is more than another trip to the gym. There are no true exercise machines; humans are the machines - a combination of gymnastics skills, Olympic weight lifting, pylometrics, sprinting and metabolic conditioning. CrossFit.com describes it best: "The needs of Olympic athletes and our grandparents differ by degree, not kind. Our hunters, skiers, mountain bike riders and housewives have found their best fitness from the same regimen. We scale load and intensity; we don't change programs."

But what it really boils down to is this: fitness, community and sport. It's difficult to define, but once experienced, becomes addictive to the core. And none of this would be possible here in Acadiana if it wasn't for some hard-working locals who had a dream and followed their visions for building a fitter community.

Each of these affiliates is unique but together complete. They are not franchises. They are the product of lots of hard work and determination by people who loved what CrossFit did for them and were willing to take a chance as small business owners in hopes that others would engage in their passion. All believe in a no-frills facility and that getting sweaty gets major results. What they offer is not time-consuming and can take anyone at any level and give them something to work for.

Wesley Sun Chee Fore opened the doors in December 2009 of CrossFit Lafayette on Ambassador Caffery, but there was a time before that when he was desperate to share the benefits of CrossFit with others. In the early days, he and a few other trainers did whatever it would take to get people fit: hauling equipment to local parks or homes of people willing to lend some space. "There wasn't a facility in Lafayette that could handle the workouts; it was an untapped market," says Sun Chee Fore. Almost a year later, Lafayette had another option across town on Cajundome Boulevard through the work-horse efforts of Jeremy Hohle at Ragin CrossFit.

"For the first six months, I coached all 10 classes every day and managed a bar on the weekends," Hohle says. "Having a second job and not paying myself [from Ragin] helped me survive the first eight months." When he debuted in November 2010, he had 20 members and now has 275. He attributes his success to not going into debt, starting small, and his knowledgeable coaching staff.

A big plus at CrossFit is the coaches who serve as mentors to push people daily to become a better self than yesterday.

Not even thousands of miles and the sands of Iraq could stop the vision of a box of their own for husband and wife owners Beau and Natalie Armentor. Beau was introduced to CrossFit by members of his troop in Iraq and instantly found a passion he couldn't wait to share with Natalie. While he was away, Natalie began to do the research and made a business plan, exhausting every option to bring their idea to fruition.

The Armentors knew not a soul in the Lafayette CrossFit community when they opened the doors of Ole Glory CrossFit in Broussard in May 2011, only a few months after Beau's tour of duty ended. The area seemed like a logical location with booming growth of the Broussard/Youngsville communities and oilfield workers near Highway 90.

"The community aspect attracted us to CrossFit," says Natalie, a former school teacher. "Our main goal was to build an atmosphere where everyone felt comfortable." She now knows all of her members' names and just about all of their children; 70 percent of the memberships are families. More recently, Natalie has shifted focus to the growth of expanding the CrossFit Kids activities. She's added a teen's only class and is planning Spring Break and Summer Camps for kids ages 4 and up.

Affiliates continue to expand in our area. CrossFit South Acadiana on Jefferson Street next door to The Juliet Hotel joins the ranks this month. Owner Jake Beebe knows he's the new kid on the block but is anxious to fill the need of Downtown's fitness community. He hopes to draw not only from local businesses in the area but also from UL Lafayette students living nearby. Even before opening, he received more than 30 inquiries to pre-register through online interest from people who stumbled upon his site. "I was determined to do this," says Beebe. "I was going to keep going until the last bank said no [on financing]." With the interest that's already been generated, he hopes to outgrow his current location and expand into an existing space next door. He will offer four classes a day but plans on expanding the schedule closer to summer.

CrossFit is on the rise not just locally; it's a national movement. And there really is something special about this concept of a CrossFit community.

I can attest to the fact that coming together for a common need of fitness nurtures the soul as friendships are built, families are strengthened and unknown needs are met. For this, I thank the owners of the eight CrossFit locations throughout the area for paving the way that will lead to a healthier Acadiana from the inside and out. And I know there are other owners just waiting to make their move.

**Cracking the Code: Translating CrossFit-ease into English
**The next time your social media feed looks Greek, thank this CrossFitter for the low-down. By Kari Walker

CF: "New PR today; I love my box for cheering me on during that WoD."

Translation: A new personal best performance was achieved at the gym in today's workout. Most workouts last thirty minutes of less but require full-force effort in that short amount of time; it is as much mental as it is physical.

Translation: A named benchmark workout part of "The Girls" series which includes pull ups and a series of Olympic lifts known as thrusters. But she really is awful.

CF: "OMG, The Games competitors are going to be fierce. #fittestonearth."

Translation: No one is about to play checkers. The CrossFit games are an annual final competition after a series of qualifying events worldwide where winners are crowned "Fittest Man/Woman on Earth." A true test of fitness. Football has the Superbowl, trathletes have Ironman and CrossFit has The Games.

Translation: All thehard work together in the gym is resulting in some fun times together. CrossFit is known for community. While we "go hard" daily, we also love tailgating, crawfish boils and family picnics. You know the saying,"all work and no play," holds true in the gym as well.

LOCAL CROSSFIT AFFILIATES IN ACADIANA (If we missed your gym, please email Kari Walker at [email protected] to be added to this list.)

Photos below by Kari Walker 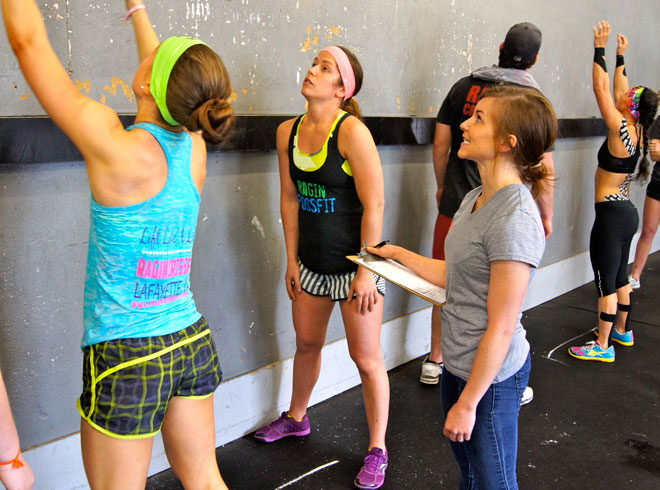 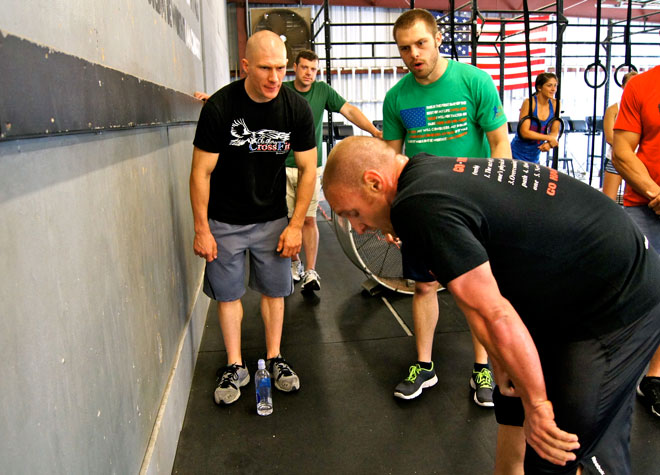 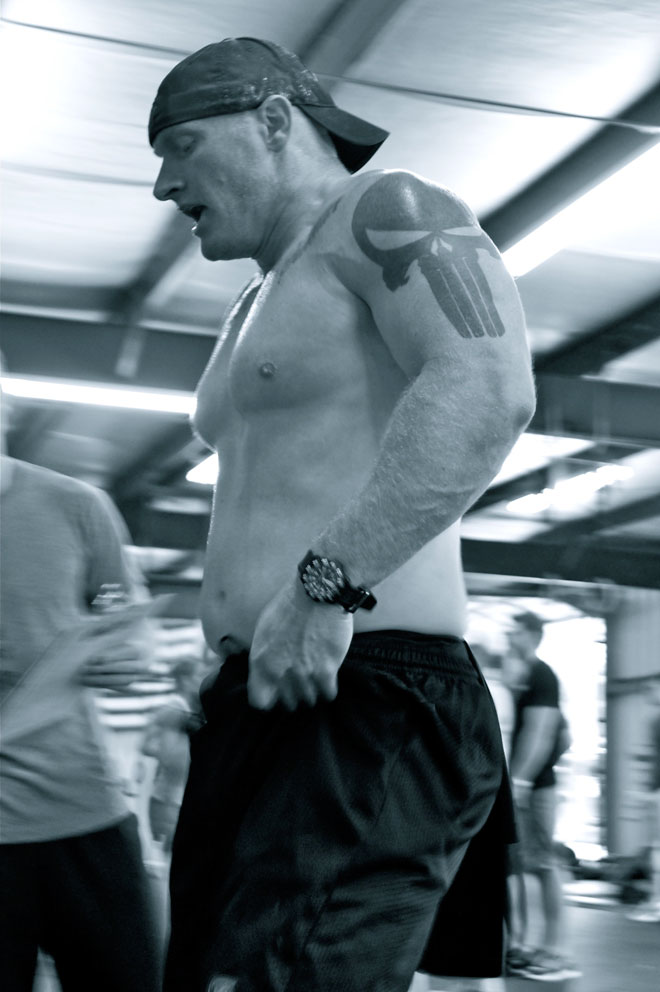 "It's a different kind of tough," says former NFL player and Lafayette native Luke Lawton, when comparing CrossFit to the NFL 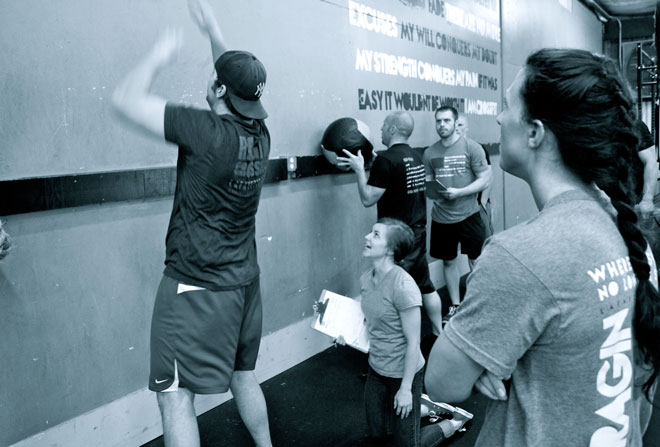 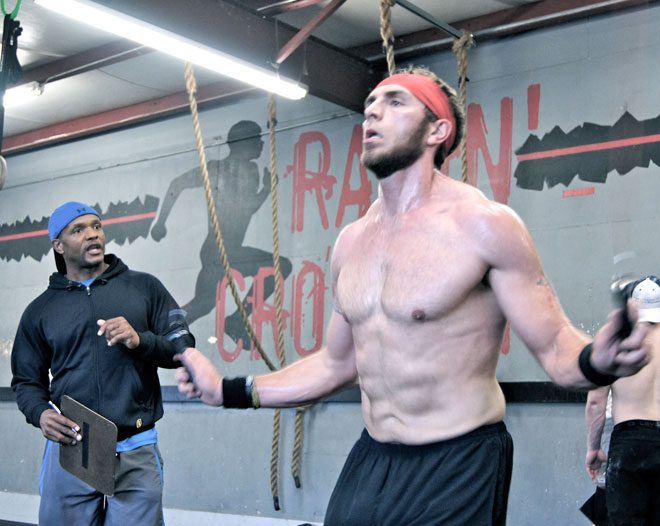