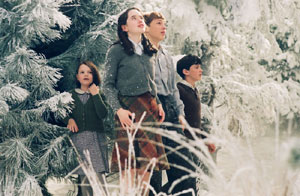 Lucy Pevensie is the baby of the family, which mostly means that she spends her time either being coddled or ignored. Her older siblings ' Peter (William Moseley), Susan (Anna Popplewell) and Edmund (Skandar Keynes) ' dutifully look after her when their mother sends them out of London to escape the Nazi air campaign against London. They try not to listen to radio reports when she is in the room, and even go so far as to agreeably play hide and seek with her on a rainy afternoon. When young Lucy (Georgie Henley) hides in a large wooden wardrobe in an otherwise empty room, though, they refuse to believe her story about where it is exactly that she's been. They don't yet believe in Narnia. There are generations of children, however, that do.

In the 1950s, Christian theologian and Oxford literature professor C.S. Lewis penned seven Chronicles of Narnia books, the first of which is The Lion, the Witch and the Wardrobe. In the canon of fantasy writing for children and young adults, these books are probably only second to J.R.R. Tolkien's Lord of the Rings. (And even saying that much will probably start a fight somewhere.) For years, kids have grown up reading Lewis' lively tales of a parallel universe named Narnia, a world first accessed by young Lucy Pevensie through her hide-and-seek wardrobe. Soon enough, her brothers and sisters find their own ways into the closet country and discover their royal destinies, fighting alongside the lion king Aslan, besting the White Witch and eventually assuming the thrones of Narnia. But the Wood Between the Worlds always belonged to Lucy first, her magical meeting with the faun Mr. Tumnus (James McAvoy) the book's very heart.

Bringing LWW to the big screen seemed more and more inevitable with each of director Peter Jackson's triumphant Tolkien installments. Shrek director Andrew Adamson finally got the gig, and he does rather well. He starts with a wonderful cast that's a perfect mixture of novelty (young Henley first and foremost) and experience (the perfectly evil Tilda Swinton as Jadis, the White Witch). Visually, LWW teems with the creatures of Lewis' imagination ' fauns, centaurs, griffins, two massive menagerie armies and majestic Aslan himself (voiced by Liam Neeson) ' even if it sometimes stumbles on less CGI-enhanced shots. LWW's biggest drawback is that it seems too small somehow, not nearly as fully realized as Jackson's Academy Award-winning trilogy. Makeup jobs on some creatures (interestingly, the most human ones) look amateurish; backgrounds occasionally appear fake.

These slips might be forgivable, but the script echoes the size problem. After two-plus hours, the story still feels sketchy in places. Jackson miraculously gave us everything we needed to fall in love with Middle Earth and more; Adamson and screenwriter Ann Peacock rely a little too much on audiences that love Narnia already. Aslan is a fierce presence because we know he's supposed to be a fierce presence. The books made us love him and fear him as deeply as the children do; Hollywood Aslan looks the part, but feels a little flat.

Still, the film is an absolute triumph in that it stays true to Lewis' voice and vision. Much has been made of LWW's Christian undercurrents. Lewis always resisted the notion that his story is an allegory, and speaking in strict literary terms, he was of course correct. But his belief can be seen all over Narnia, and he knew it, even occasionally acknowledging it during his lifetime with a wink and a nod. But he would have hated the idea that Narnia had become simply a sermon. He wanted it to be a story; he wanted to capture the imagination in service to the divine. Most of all, he wanted children to have something beautiful that was all their own; he wanted all of us to be in on Lucy's secret, that there is a world of mystery and magic, a world where an impossibly loving Aslan waits, a world we have to believe in to see. And he wanted it to be a story told with intelligence and wit, not any of that namby-pamby nursery-rhyme nonsense and certainly not with any classroom-lecture overtones. This is a dazzling distinction that the filmmakers have managed to maintain, even as our omnivorous culture vultures bicker back and forth over meaning and message.

Lewis did an amazing thing when he created his mythological land of Narnia. The amazing part was not his epic story of another world where a lion and his four human friends battle a witch for the soul of a country; no, the best part was that he remembered exactly how a child wanted to be told such a tale. And LWW, for any of its other flaws, holds on to that essential magic. In his heart, Lewis must always have been a Lucy. Aren't we all?