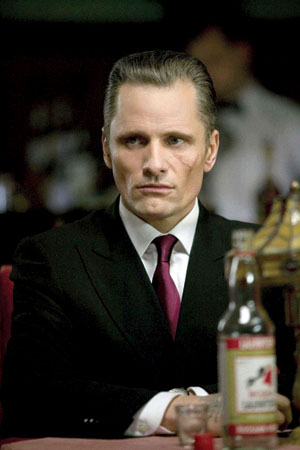 On the dark, rain-slicked streets of director David Cronenberg's London, there is a place even the most observant local passersby cannot see. This impenetrable quarter appears on no city-street grid, wrapped as it is in the foggy mists of its otherness ' a place as intangible as the damp of the English winter chill and just as settled in the bones. It is the closed world peopled by the vory v zakone, mafia offspring of revered Mother Russia, a shadow world that sits quite quietly in the darkest heart of London. It is the underbelly of the old country, a place alive only in its most ruthless sons, a personal and portable land of exile rooted in tradition, family, lawlessness and violence. If most people know this land exists, most people fail to understand its brutalities, always out of sight, usually among their own.

It is a reality most unreal to Anna (Naomi Watts), a midwife at a London hospital who discovers a diary on a Russian 14-year-old just before she dies giving birth to a baby girl. Fresh with grief for her own stillborn baby and determined to find the family of the orphaned child before she is fed into the foster-care system, Anna draws dangerously close to a world she has heard of, but has not known.

Looking for information about the deceased mother and a possible translator for the slim, red-and-white journal, Anna seeks out the proprietor of a Russian restaurant, led to him by a business card tucked between pages. The white-haired, sweatered Semyon (Armin Mueller-Stahl) plies her with borscht and paternal politesse, and if she at first too naively answers his questions about the girl and the baby left behind, perhaps she is simply blinded by this step into an exotic world that is half hers and half not ' she is the thoroughly assimilated daughter of a Russian father and British mother (Sinead Cusack). While at the restaurant, she encounters Semyon's son Kirill (Vincent Cassel) and the family driver Nikolai (Viggo Mortensen), just back from a bloody errand of their own.

From there, screenwriter Steven Knight (Dirty Pretty Things) unfolds his story on two levels: Anna's stubborn quest to get to the truth about the baby for which she feels responsible and Nikolai's machinations as he ambitiously attempts to rise within the ranks of the crime family he serves, a family whose illicit scope includes white slavery and forced prostitution. The two threads, of course, intersect continuously, in this occasionally explosive, always compelling tale of morality, sacrifice and ' lest we forget this is a David Cronenberg film ' severed fingers and slit throats.

Cronenberg movies can be called lots of things, but cliched is not one of them. The Canadian director (M. Butterfly, Spider, A History of Violence) conducts intricate little cinematic experiments, filmed short stories queasy with discomfort and deception. He focuses equally on his character's personalities and perversities. Every Cronenberg movie has monsters, and his monsters always have reasons. More often than not, they have beautiful faces, too. Faces that fool, carefully constructed deceits passionately married to mirror-mirror-on-the-wall self-deceptions. It's his way with people ' both his actors and his fictional creations ' that keeps his movies interesting, even when they are not totally successful.

Parts of Eastern Promises suffer from a visual dullness, as if the gray of the unrecognizable city streets of London has swallowed whole this story of suffering. Perhaps that was an intentional choice, an attempt to be true and not sensational. Too often it feels artless and meandering. Cronenberg's best scenes are interiors, and they are usually laser-focused on the faces of his actors. Mortensen (The Indian Runner, The Lord of the Rings series) has found a friend in Cronenberg, the director drawing complicated, compelling performances from the fledgling leading man. As with A History of Violence's All-American Tom Stall, Mortensen brings meticulous dimension to thick-accented, scheming Nikolai. Nikolai's favorite thing to say is, "I'm just a driver," but there's a way he flicks his eyes and lowers his lids when he does that hints at an offhand intelligence. His blank stares don't shut us out, but draw us in.

The film's signature scene is a knife fight in a public bath house. Nikolai is caught unaware and unclothed, a visual metaphor for his lowered defenses as well as a continuation of Cronenberg's body-conscious explorations of birth, death and the violent life in between. The nudity in the action scene is what is getting the most attention, but it's not what startles most; that would be the aural landscape of this fight to the finish. Cronenberg makes sure we hear the blades slashing through skin and tissue, makes the pain personal and physical. If not the direction at his very best, Eastern Promises is still quintessential Cronenberg, finding yet another set of pressure points ' these things we don't want but must do in order to survive ' and probes them unblinkingly.