Not even a first-time director with an overactive romantic imagination can completely derail a modern classic. 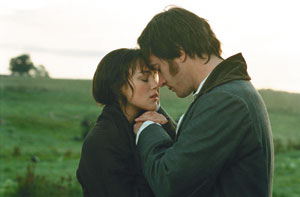 Debuting director Joe Wright is lucky that it's metaphysically impossible to make a bad film version of Jane Austen's Pride and Prejudice. Austen's eye and ear are too keen, her characters too well and too wittily conceived, for any Joey-come-lately to truly mess things up. The fundamental sass and structure of Austen's much-loved masterpiece survive ' even thrive ' in this latest adaptation. Still, for everything this version manages to get right, there's something about Darcy (and thus the book) that Wright just gets wrong.

Darcy and Elizabeth are the original David Addison and Maddie Hayes: sharp-tongued, sure of each other's flaws and certain it was hate at first sight. Darcy (Matthew MacFadyen) is an arrogant, moneyed, repressed aristocrat; Elizabeth (Keira Knightley) is one of five marriageable daughters, a serious girl in a silly family. They meet, leap to conclusions ' and somewhere along the way fall madly in love.

Knightley (Pirates of the Caribbean) makes a marvelous Elizabeth, full of fierce opinions and quippy comebacks. Too often, Elizabeth is played as a smarter-than-average flirt (Greer Garson, Jennifer Ehle), a trap Knightley sidesteps nimbly with a slightly awkward demeanor and an angry intelligence. Blithering Brenda Blethyn (Secrets & Lies) was born to play the flighty, desperate Mrs. Bennet; Judi Dench summons up her most haughty imperiousness for Lady Catherine de Bourg. As Elizabeth's almost-fallen sister Lydia, Jena Malone (Saved!) continues to obnoxiously overact, but then again, her character is supposed to be simpering and annoying, so it works.

But what about Darcy? MacFadyen is a gem of an unknown actor, perhaps best known for his too short, spectacular turn on the BBC spy series, MI-5. There isn't anything wrong with the technicalities of his performance here; in fact, his Darcy comes quite nicely undone. What MacFadyen suffers from is bad framing. His first appearance, an overplayed entrance to a country ball, is made too much of; the music stops, and all eyes focus on Darcy as he stalks through the parting crowd. By the end, Darcy is walking across a dewy English field through a thick morning fog to profess his undying love to Elizabeth, his shirt collar unbuttoned and his hair all disheveled. And we're left wondering how such a bad version of a hot-blooded Heathcliff wandered into what's supposed to be a straitlaced comedy of manners with a whole lot more to say about aristocracy and appearances than about romance.

Darcy shouldn't be made ridiculous; he's not the leading man of a paperback romance novel. He's just a stern man with a lot of money and, like Elizabeth, healthy doses of pride and prejudice that he must learn to overcome. But an air of absurdity persists nonetheless. Wright is to be commended for a good first try, but he ought to have refrained from recasting P&P as a mild bodice-ripper for the smart set.

Welcome Back, Potter
The world's favorite young wizard returns with dragon duels, schoolyard crushes and a much-anticipated first glimpse of a real, live, flesh-and-blood You Know Who.

There was a decided, depressing and less-than-magical feeling about the first two Harry Potter films. Director Chris Columbus managed to turn J.K. Rowling's phosphorescent phenomena into run-of-the-mill charm repellents. Fortunately, the series catapulted to greatness in its 2004 installment; the third film, Prisoner of Azkaban, was marked by Alfonso Cuaron's artistic, shadow-tinged, intelligent vision.

So it was with sadness that Potterphiles learned that Cuaron would be replaced by Mike Newell for this year's Goblet of Fire. At first glance, Newell is not a natural choice. Mona Lisa Smile? Donnie Brasco? You have to go all the way back to 1992 to understand why he's a brilliant fit, and it's an often-overlooked, always-underappreciated feast of a film named Into the West about two young Irish boys and their magical horse. The film is fanciful, deep and absolutely fantastic. It was the perfect proving ground.

Newell inherits the popular serial epic as Harry (Daniel Radcliffe), Ron (Rupert Grint) and Hermione (Emma Watson) hit puberty with all its tears and sweaty palms and scary school dances. This, combined with our young hero's disturbing dreams and aching scar, makes for a much hotter Potter. It seems that He Who Must Not Be Named might be coming soon to an apocalypse near you, and the three Hogwarts student/sleuths embark on their usual mixture of mischief and mayhem. Things take a more frightening turn, however, when Harry finds himself entered into the deadly Tri-Wizard Tournament, a competition normally reserved for much older students. He must face dragons, maniacal merpeople, a carnivorous labyrinth ' and finally Lord Voldemort himself in a marvelous moment that changes everything.

As the Evil One is finally freed from his noncorporeal limbo, his cloak swirls around him like smoke; hairless, pale and slimy, actor Ralph Fiennes is at his most seductively sinister. He is the perfect counterpart to Radcliffe's prep-school perkiness, his presence adding a fantastic frisson to the proceedings. This darkness, showcased deftly by Newell, is true to Rowling's writing and sets the stage for all the more harrowing things to come.

In this (and every other) scene, Newell uses special effects wisely and coaxes strong performances from his cast (with the sad exception of Michael Gambon, who overplays Dumbledore's increasing worry and weakness). The film is fast-paced, occasionally funny and frightening. Like Cuaron's Azkaban, watching Goblet is much like curling up with the eponymous novel and letting imagination take over.