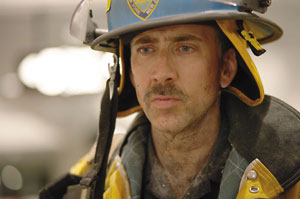 The Romans gave history the phrase "Memento mori," in all its deceptive simplicity. Probably first coined as a catchy reminder to high-and-mighty conquerors that all men share a common, unshakable mortality, these two little words speak larger philosophy. For if we all remember that someday we must die, if death always sounds as a dim drumbeat in the far reaches of our souls, then we also recognize that today we must live. Sometimes in an eat-drink-and-be-merry kind of way, ideally more often in a love-appreciate-and-be-present kind of way. Seen in this light, the moving and masterful World Trade Center, focused on two men who rose from the rubble of a cursed and bleeding day, doesn't so much indulge in Hallmark-card constructs as simply revisit the wisdom of the ancients.

A film about 9/11 might seem an odd place to celebrate life, odder still that it comes from the heart and hand of a man most people only know as a cartoon. Director Oliver Stone has long been misunderstood. After JFK, he was a conspiracy nut. After Natural Born Killers, an ignoble savage. After Alexander, the pop-culture powers-that-be declared him a director in freefall. But Stone has long been underestimated. He is a sly provocateur, an intellectual multi-tasker. As a director, his unerring eye and profound sense of simultaneous possibilities fear no contradiction. As a writer and storyteller, he feints and fudges, laying bare the fallibilities of his audiences and of history as a discipline. He overreaches, and an unforgiving, lazy public overlooks his promise. His work becomes tangled in politics, his fancies mistaken for facts. But he struggles to serve the dual purposes of entertainment and enlightenment. Like Picasso's famous adage, Stone's art is the lie that tells the truth.

He was handed a gift in newcomer Andrea Berloff's based-on-a-true-story World Trade Center script. Here was the 9/11 movie no one expected and certainly not from Stone. World Trade Center tells the story of Port Authority officers John McLoughlin (Nicolas Cage) and Will Jimeno (Michael Pena), who went to work on an ordinary day and then went into the towers to help when that day took a dark turn. The cops never made it past the concourse area. When the first tower fell, they were buried, pinned near each other under broken concrete and twisted metal. World Trade Center is the story of how they kept each other going during those long hours until miraculous help came. The story fluctuates between the ash and horror of Ground Zero and the terror of the frayed homefronts, as wives Donna McLoughlin (Maria Bello) and Allison Jimeno (Maggie Gyllenhaal) await word with extended family and friends.

Politics have little place in Berloff and Stone's moment. And that is what World Trade Center is: a series of evocative, emotional moments. The light and architecture of a proud city as it awakens on a clear, fall day. The confusion and chaos in the precious minutes between plane's impact and tower's collapse. McLoughlin's tortured Lord's Prayer, yelled in agony as the second building falls and crushes him further. His refusal to give up because his wife's kitchen cabinets remain unbuilt. Jimeno begging him to somehow get word out into the void that Allison should name their child Olivia, just the way she wanted. A mom quietly and courageously admitting to her little girl that she doesn't know if Daddy will come home. A former Marine (Michael Shannon) and a troubled paramedic (Frank Whaley) walking into hell to snatch back whatever souls they can. World Trade Center is a film about how the worst around us can bring out the best in us and remind us of what is truly important.

But it is more than a feel-good film about a feel-bad tragedy. The deep losses of that day are always palpable. People covered in soot and blood wander the streets of lower Manhattan. Horrified first responders watch as a single shadow falls from a burning, smoke-belching tower. McLoughlin, portrayed by Cage at his most quietly intense, mourns the men who followed him into the buildings without question and are now lost, even as he himself lays dying. A suburban street turns into an eerie echo chamber, the lights and cacophony of now-chaotic news broadcasts lighting up the night. And finally, after McLoughlin and Jimeno have been carried to safety by the hands of many men, a rescue worker's sudden realization that all those other people simply have vanished. The scenes that follow represent the most stunning evocation of the dead since Bruce Springsteen's melancholy elegy "You're Missing."

Almost immediately after the buildings' collapse, fire and a strange wind blow through the space where McLoughlin and Jimeno lay, a pentecost of power and pain. Berloff and Stone make plain their sense of consecration. In fact, if the film can be said to have a political edge at all, it might be its implicit argument that Ground Zero is an open grave, a sacred place that we can't understand and perhaps should not alter. Better to look upward and then inward. Better to, in the horrors of this world, love our families, hug our friends and watch with a father as an afternoon breeze lifts the long brown hair of a little girl named Olivia.