Knocked Up and Mr. Brooks offer opposite ends of the summer movie-going experience. 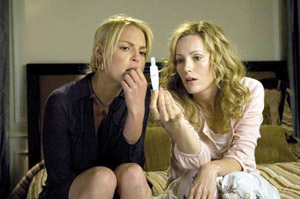 Judd Apatow likes impolite conversations. He builds his movies around them.

The 2005 smash hit The 40-Year-Old Virgin might best be remembered as the beginning of break-out bigness for star Steve Carell (NBC's The Office, this summer's Evan Almighty), but it also launched writer-director Apatow's peculiar, politically incorrect brand of humor into the spotlight. Apatow proved you can write a film whose central concerns ' virginity, promiscuity, awkward and not fully realized sexuality ' can be raunchily, rowdily and (quite surprisingly) romantically analyzed. His nonsensical sensibility sees the sweet in the sour, and the sour in the sweet. And that was before he got so gloriously Knocked Up.

Alison Scott (Katherine Heigl) is an up-and-coming producer at the E! cable channel. She and her sister Debbie (Leslie Mann, aka Mrs. Apatow) celebrate Alison's promotion to on-air personality with a night on the town that ends in a hot-and-ultimately-bothersome hook-up with lovable loser Ben Stone (Seth Rogen). Eight weeks later, Alison discovers that she is unexpectedly pregnant with Ben's child.

What follows is a comedy of choices. Alison and Ben decide to give parenthood the old college try (or in Ben's case, the old-college-frat-boy try), all the while surrounded by the plateauing marriage of Debbie and husband Pete (the inimitable Paul Rudd) and the stagnating neverending-adolescences of Ben's stoner buddies (Jonah Hill, Jason Segel, Jay Baruchel and Grant Hayes). Alison's mom (Joanna Kerns) and Ben's dad (Harold Ramis) offer hilariously little help in the way of guidance.

In a blink-and-you'll miss-it moment of brilliance, Kerns' brittle mother delivers one of the film's funniest, most offensive jokes, a throwaway line tucked in the middle of her muddled maternal "advice." Hers is definitely best, but the fast-and-furious jokes are all as funny and as offensive as rightfully could be expected from a movie so genteelly titled "Knocked Up."

There are two sides to Kevin Costner's character in the new thriller Mr. Brooks, and only one is charming. There are two Mr. Brooks. The first is Earl (Kevin Costner), upstanding businessman, head of a booming Portland box company, happy husband and father, chamber of commerce man of the year. Earl drives an SUV, loves his wife Emma (Marg Helgenberger) and daughter Jane (Danielle Panabaker), and hides his deeper, darker side.

Which brings us to the second Mr. Brooks, Marshall (William Hurt), a malicious figment of Earl's cold-blooded imagination, the part of his bruised brain that needs to kill, wants to kill, likes to kill.

For long periods of time ' up to two years at the film's beginning ' Earl keeps Marshall at bay, attending AA meetings and referring only to his addiction. He spits out the serenity prayer between clenched teeth; he adjusts his eyeglasses with pent-up control and tries to ignore Marshall, politely explaining that he has no intent of ever killing again.

Until, one night, he does. He can't help it because he is more Marshall than he is Earl, less Earl than he is Marshall. He is both, and neither, and the cops ' led by Tracy Atwood (Demi Moore) ' call him the "Thumbprint killer" because he's good at not leaving unintended traces. (Only his victims' thumbprints, never his own prints, remain on the scene.) But then a hobbyist photographer with a taste for homicide (Dane Cook) catches him on camera, blackmailing his way into a tag-team murder. He won't give up Mr. Brooks, if Mr. Brooks will help him feel the thrill of the kill.

Written by Bruce A. Evans and Raynold Gideon, Mr. Brooks suffers from a twisting, overladen plot. A murder at daughter Jane's college and her possible pregnancy sputter into the story; this sidetrack has a knife-sharp point, interesting and yet still clumsily explored. Moore's hardened detective Atwood is in the midst of a messy divorce and she's tracking another serial killer who's escaped from prison. All these developments serve the plot eventually but force the film into episodic spasms.

What saves the film is the lovely interplay between Costner and Hurt as two sides of a very divided soul. It's a clever conceit, well-cast and well-executed, a pairing that cries out for a more tightly scripted movie. Because, just like Mr. Brooks at the mercy of Marshall's killing urges, in the end, the audience is left wanting more.