Why see a lousy remake of The Bad News Bears when you can stay home and rent the 1976 original? 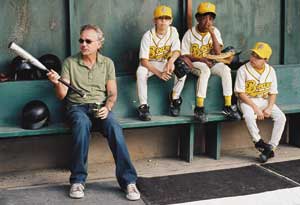 When the writer of Ecclesiastes observed that there really isn't all that much new under the sun, he was making a larger point about the vanities of the human experience. Hollywood must have missed that point, but it sure did gain a motto. Scan this summer's slate of movie releases. Are there any concepts out there that haven't been blenderized, bowdlerized, revisited or run into the ground? Of course there are; they're just darned hard to pick out in a sea of movies like Herbie, Bewitched and The Bad News Bears.

Why remake a classic? It's understandable from a studio's point of view: concept made money before, concept will make money again. People love what they already know. It's sad because it's true. But someone needs to whisper into the ears of all these writers, directors and actors that there is such a thing as loving something to death, especially when your affection spits in the eye of originality. Step away from the cameras, people; you have the right to remain silent.

Still, it's not too hard to see how the creative types get sucked in. It's the same way audiences do. The idea of the remake is the serpent in Eden; the potential of seeing a certain cast and crew pay homage to something we hold in highest regard slithers its way into our brains, and we start believing that this could be good. It could even be necessary. And just when we've given over completely and squelched the now-quavering voice of reason, the lights go down, and we find ourselves pitched forward into the all-consuming beast's belly. We are seeing a new incarnation of The Bad News Bears, and it is not good.

Insidiously, Bears managed to seem promising as long as it remained in the realm of the purely theoretical, but then again, the gravest sins usually do, don't they? Director Richard Linklater doesn't just have indie cred; he pretty much created the concept. His movies Dazed and Confused (1991) and Slacker (1993) did more than jumpstart a movie movement; they helped define an entire brilliant-but-bored generation. Additionally ' and almost counterintuitively ' we've seen him work well with kids before, for 2003's School of Rock, an unlikely comedy hit. Screenwriters Glenn Ficarra and John Requa jolted complacent moviegoers with their foul-mouthed, funny, anti-holiday film Bad Santa (2003). Wait a minute. Could this team ' fronted by the slick, sick Billy Bob Thornton ' build a better Bad News Bears?

Um, no. Stay home and rent the original. It isn't that the new one does anything spectacularly wrong; it's that the new one has absolutely no good reason for existing. Not one. The jokes aren't that funny, the direction isn't that focused, and the acting's just not that good. Thornton plays Buttermaker, this time a womanizing exterminator who initially uses the ragtag team members to crawl under houses looking (and spraying) for rats. Marcia Gay Harden plays an uptight, overscheduled lawyer mom who sued to get her athletically challenged son, Toby, a team in the league and then forked over the cash that got Buttermaker to sign on as coach in the first place. A completely anonymous and sadly unimpressive band of children (not a Tatum O'Neal among them) play the Bears.

All of this goes on in front of a lens quite possibly just set up and abandoned by Linklater. Granted, his directorial style has always been laidback, but Bears' lackadaisical vibe verges on the absurd. Halfway through, you almost expect the kids to just up and go home for dinner as the credits roll. For his part, Thornton seems to believe that holding a beer can and cursing a few times with a twinkle in his eye is all the acting he has to do; his Buttermaker smiles too much and slouches through too many scenes, for the most part an inebriated but avuncular nonentity. Where is the vile glee, likeable unlikeability and ' oh, I don't know ' actual effort of his bad Santa? And here's a news flash: Wiser-than-their-years children who swear like sailors aren't the novelties they once were; they are in most movies these days, and many grocery store aisles. The film's humor is facile; it's not smart, and it's certainly not surprising. Athletic cups make people snicker; ethnicity was funny last time. In the end, the only charm that exists in Bears is the attachment we all feel to the 1976 original. And that's a pretty crappy reason to like a movie.

To even call Bears a remake is to pay it an inadvertent compliment; it's a cynical, stick-figure, emotional-Cliff's-Notes version of a modern treasure. With so little effort showing onscreen, the filmmakers bank on the fact that audiences loved the first one enough to accept a lazy interpretation. The real tragedy isn't the absolute waste of talent that Bears represents. The real tragedy is that this trite, forgettable, lackluster summer movie will skate to box-office respectability, if not outright success. People love what they already know. It's sad because it's true.