Debuting director Ben Affleck's movie is Gone Baby Gone, but his career is back and on an exhilarating new track. 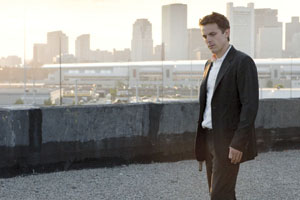 Witness the rebirth of Ben Affleck.

Somehow, in the decade since the surprise success of 1997's Oscar-winning Good Will Hunting, Affleck's writing partner and childhood friend Matt Damon managed to stay off the paparazzi radar, choose performances and projects wisely, and quietly become one of Hollywood's shiniest young stars. Affleck, on the other hand, went a little more rock star, what with his participation in the two-headed-publicity-hydra Bennifer and a seemingly unbreakable string of high-profile film flops. The substance and promise of the early Oscar win seemed to stick to Damon, while Affleck appeared to demonstrate early symptoms of all the flash ' and flame-out ' of one of Tinseltown's sadder tragedies-in-the-making. It became all too easy to assume that Damon was the duo's artistic talent while Affleck brought the brawny affability. Easy, but apparently off the mark.

The in-his-celebrity-skin comfort that Damon possessed instinctively just took a little (OK, maybe a lot) longer for Affleck to find. But a very different, more serious, A-level, Ben Affleck surfaced in 2006 for Allen Coulter's frustratingly underrated Hollywoodland; as embittered TV Superman George Reeves, Affleck dredged up a spectacular supporting performance that should have garnered him intense awards attention. In deftly portraying an ambitious actor slowly stripped of his dignity by the system and unforgiving fates, Affleck was beginning to regain his own. (Hollywood can be as instantly forgiving as it is mercurially cruel, and Affleck was on his way back into the club.)

So what would be next in his suddenly-not-so quixotic quest to rehab his reputation? A similarly meaty role in a similarly serious film made conventional sense, but Affleck chose to take himself out of the picture altogether, adapting a dark, deep Dennis Lehane novel about a missing child and choosing to direct it himself. Risky. And right. While not without flaws, Gone Baby Gone is strikingly intelligent, nuanced and well-filmed. Affleck has come full circle, back to all that promise that was once attached to his name. Defying F. Scott Fitzgerald, he's getting a second act.

Set in the working class neighborhoods of Boston, Gone Baby Gone centers on the disappearance of 4-year-old, angel-haired Amanda McCready (Madeline O'Brien). In an all-too-familiar modern-media tableau, news cameras besiege the McCready home, as friends and family recount her disappearance from her own bed and beg for her return on a 24-hour on-air loop. Law enforcement icon Jack Doyle (Morgan Freeman) heads the now-three-day-old investigation, none too pleased that the child's distraught aunt Beatrice (a ragged, raw Amy Madigan) has bucked her husband Lionel (the elaborately mustachioed Titus Welliver) and hired missing person detectives Patrick Kenzie (Casey Affleck) and Angie Gennaro (Michelle Monaghan) to supplement his troops. As the case unfolds, Amanda's mess of a mother, Helene (Amy Ryan), borders on the uncooperative, as do hard-bitten detectives Remy Bressant (Ed Harris) and Nick Poole (John Ashton). The patient, passive-until-pushed Kenzie quickly becomes the search's quiet heart, his lifelong knowledge of the neighborhood's tough guys both helping and hurting the police work until he finds himself facing a choice that will change everything.

Serendipitously, just as the elder Affleck's star rises again, the younger Affleck's star rises in the first place. Casey (The Assassination of Jesse James by the Coward Robert Ford) plays his Kenzie as sort-of-smart stand-up guy, a south Boston partisan who is in this working-class world but somehow no longer really of it. His observational reserve and beleaguered purity is matched by Ryan's belligerent Helene; the Tony-nominated actress makes the bewildered mother a complicated swirl of ugliness and fragility. Their twin performances outpace even a magnificently over-the-top Harris and a Freeman who might not be at the height of his powers in Gone, but is present enough to show us he's still got at least a few new expressions in his arsenal.

Affleck's direction is strong. He allows his actors the creative space to breathe, which at times allows them to speechify just a few moments too long, but he has an artist's eye for color and framing and a sense of just how long to linger. (The film's final shot is masterful in its length.) He falters only once, in the film's most intense sequence, a shoot-out, reverting to a series of showy episodic shots instead of letting the uncomfortable action unfold more fluidly. The unintentional vandalism of inexperience, his choice creates a gash in the middle of an otherwise amazing painting.

Perhaps his smartest move was the source material he chose to adapt with cowriter Aaron Stockard. More than just the whodunit story of a missing child, Gone Baby Gone is a rich exploration of motive and might. Its twists and turns subtly prod society's comfortable paternalistic attitude toward members of its underclass, in this case the rough-and-tumble Boston Affleck grew up in, and the story powerfully questions if change from without can ever be as valuable and as lasting as change from within. With Gone Baby Gone, Affleck shows he knows the answer.