A long weekend trip over Easter provided a culinary tour of Tampa, Fla. This could be said about pretty much any city in the South during the spring, but Tampa is beautiful this time of year. The weather is perfectly moderate and the produce is prime. When I had the pleasure of visiting Tampa during my long Easter weekend, my hosts, a family of Sicilians, were sure to give me the taste-tour as well as providing delicious food from the family kitchen.

Sausage and white pizzas from Alfonso's.

Being of Sicilian ancestry, the family had a long ago discovered its favorite pizzeria, and it was the farewell meal. Alfonso's Pizzeria in North Tampa crafts New York-style pies with the perfect balance of toppings. We had the sausage pizza, always a standard and a favorite, and the white pizza, which was topped with enormous, thick slices of fresh mozzarella, one of this eater's all-time favorite foods. It's hard to mess up fresh mozzarella, and Alfonso's piled it on. It also kept well for the drive home (in a cooler) and reheated wonderfully the next day for lunch - but never reheat pizza in the microwave. Always in a toaster oven.

On Easter Sunday, the lamb was the centerpiece of a beautiful outdoor lunch on the back patio. Standing rack of 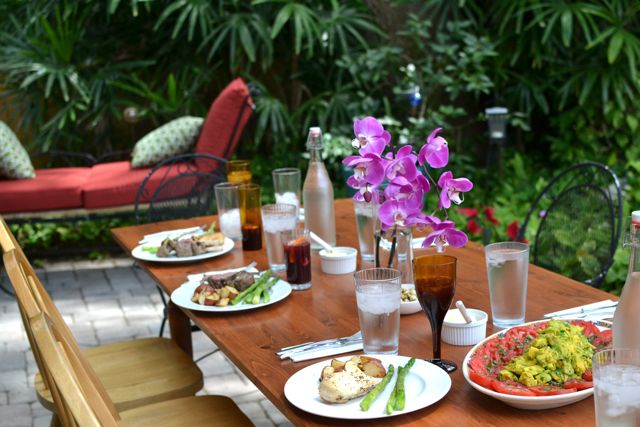 lamb, complemented by a rosemary rub, was not a standard in my house growing up, so once I was introduced to it I couldn't get enough. Fresh asparagus, lightly steamed, was the green, but a guest brought a salad chock full of fresh Florida produce. Huge Florida avocados filled the center of the plate, semi-mashed with garlic salt and olive oil, surrounded by beautiful, deep red tomatoes, which are not quite in season here in Louisiana. It was simple but delicious, which often describes the best dishes.

After an exhausting day at Redington Beach, we needed sustenance that satisfied, preferably in the form of seafood. Grouper is the Tampa Bay area's fish favorite, so much so that it's been overfished in the past few years, but recent bans have helped the population bounce back - so don't feel guilty chowing down a fresh catch. At Wahoo's Waterside Pub & Patio, the fishing boats are tethered 500 feet from the patio, and they travel out every day to reel in the mild, flaky fish. I opted for the grouper sandwich, grilled, which is the restaurant's signature dish. I must say, it was divine. It was so good on its own that I took it out of the bun and ate it with a fork halfway through my meal, which was accompanied by a Yuengling. Grouper is definitely the way to go in the Tampa Bay area. 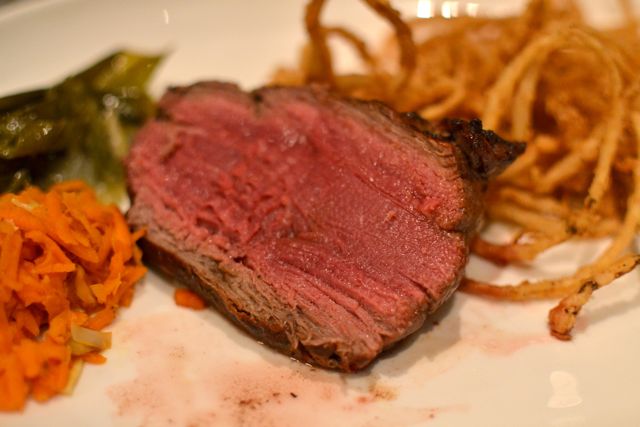 The capstone of my visit was a night at Bern's Steakhouse, which, as the restaurant boasts, is truly an experience. The night began with a classic Bee's Knees cocktail with homemade honey syrup, which was necessary to peruse the five-page explanation of how to choose your steak. Eventually, I opted for the chateaubriand, the same cut as a filet mignon but instead of being cooked flat, it is turned so the sides are exposed to the heat, which allows for a better char on the exterior while allowing the interior to remain rare. Each meal begins with a serving of the restaurant's famed French onion soup, which is topped with a blend of four cheeses instead of the traditional Gruyère. Next is the salad, but we opted for the Caesar, which was dressed fresh at the table, complete with anchovy rub for the bowl and a coddled egg.

Few things could prepare you for the beautiful steak that arrives at the table. My chateaubriand was a beautiful piece of meat, beautifully red in the center and so tender I could have cut it with a fork - but I dove in with my steak knife. With the steak came vegetables, carrot and greens, straight from the Bern's farm, which has been in existence for as long as the restaurant itself - it opened in 1956 after Bern Laxer swore to never enter the restaurant business. For a salty addition, a stack of onion rings - not quite haystack, not quite classic rings - sit aside the steak.

After you've sucked down the last of the pinot noir, however, you can go for a tour of the kitchen before your dessert course, which can be found upstairs in the Harry Waugh Dessert Room. The kitchen is an impressive operation, with 80 staff members working to make the evening run smoothly. All steaks are aged in house, and then hand-cut for each order. Also in the kitchen are the coffee roasters, both of which are older than 100 and produce smooth after-dinner drinks (but more on that later). The tour ends with the wine cellar, which houses the world's largest privately owned wine collection at 500,000 bottles. The oldest is 130 years old and the most expensive bottle is $30,000. 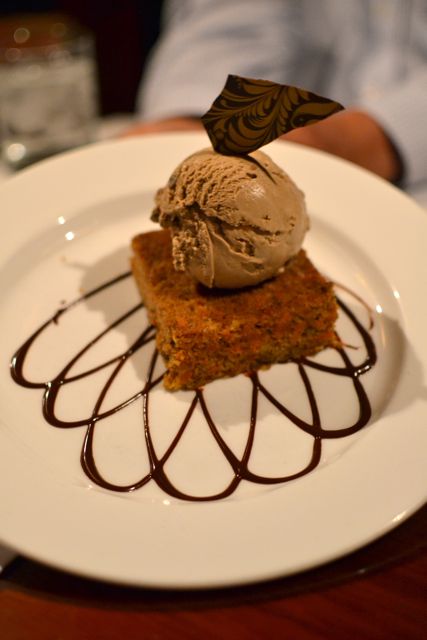 Upstairs, in the dessert room, we couldn't decide (the dessert menu is six pages!) so we opted for the Bern's sampler, and fell so in love with the brownie topped with macadamia nut ice cream, a signature Bern's dessert, we ordered a full plate of it. The evening ends with an espresso brewed with those seasoned coffee beans, straight from the roaster, and a toast: to good health and good eating.