Woody Allen's latest movie, Match Point, is good ' but it was great when it was Crimes and Misdemeanors. 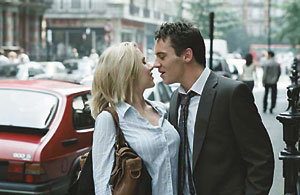 Tragedy plus time no longer equals only comedy; it now begins to neatly sum up Woody Allen's career. His latest effort, Match Point, has been ballyhooed as the Wood-Man's return to form ' in truth, he's only returning to the very familiar form of his 1989 masterpiece Crimes and Misdemeanors.

It's beyond disappointing to see an original thinker wander a wasteland of mediocre ideas for years (Celebrity, Curse of the Jade Scorpion, Hollywood Ending) and then receive acclaim for simply warming over a couple of his more brilliant old ones without adding anything truly revelatory to the mix. Allen has long been fascinated by the interplay of love and death, luck and choice, action and consequence; his best movies have always been about the friction of those odd intersections. And he returns to them now, but not necessarily with fresh eyes or a maturing perspective. Twenty years ago, Match Point might have felt like the work of an interesting filmmaker; today, the movie makes us think that maybe Woody is a little tired and out of new ideas. Still, as there always are in Woody Allen movies, there are occasional visual and literary sparks of life in Match Point that make it more than just a miss.

Irish tennis pro Chris Wilton (Jonathan Rhys Meyers) wants to be a self-made man. He toured on the professional circuit for a while, but left the life when he realized he was good, but not great. Now he teaches tennis to the blueblood members of one of London's finer clubs, reads Dostoevsky in his spare time and dreams of doing "something" with his life, really making a "contribution." He meets up with Tom Hewett (Matthew Goode), scion of a British business family and all-around charming chap. The two bond over a shared love of opera, and Wilton soon finds himself a regular at Hewett family get-togethers. He takes up with Tom's plain-Jane sister Chloe (Emily Mortimer), adjusting with preternatural cold fishiness to upper class ways. Until, that is, Tom's American actress fiancée Nola Rice (Scarlett Johansson) enters the picture.

Nola is a mess. She's an actress only in the broadest sense of the word ' one commercial and a string of failed auditions are all she has to her credit. She drinks too much. Mother Hewett (Penelope Wilton) hates her and baits her at every opportunity. Despite his other entanglements, Wilton is attracted to her. (It is Scarlett Johansson, after all, and all men are allegedly attracted to Scarlett Johansson.) Perhaps it's a stirring seed of self-destruction. Perhaps it's that he realizes Chloe is good, but not great. Maybe he thinks that Nola is an awful lot like him: hungry, climbing and a little bit lost. Maybe he's just not thinking at all. But from this point on, Wilton begins to lead a double life, going through the motions of devotion to his new wife Chloe and the fortune she represents but burning for Nola and using his considerable talents to arrange stolen moments. Eventually, Nola's instability breaks the surface and threatens Wilton's hard-fought but precariously built life. It's time for a choice or, at least, a little bit of luck.

There has always been something fundamentally unlikeable about Meyers (Velvet Goldmine, Bend It Like Beckham), a coiled cruelty in the way he softly speaks his lines, a reptilian lassitude in his blank stare. It works for him in Match Point as never before. He makes Wilton one hero of an anti-hero ' we don't really like him, but somehow we want to see him succeed. Johansson is another story. She's like Keanu Reeves before he finally hit his stride in popcorn thrillers like The Devil's Advocate and The Matrix: wooden, uncomfortable with intellectually driven dialogue, and pretty but awkward. The immensely overrated actress (Lost in Translation) flounders, undercutting an interesting character with a shrill performance that never lets us forget who we're watching. In contrast, Goode and Mortimer stand out as the Hewett siblings, the two actors comfortably and unaffectedly walking through Allen's notions of noblesse oblige.

The biggest problem with Match Point is its philosophical debt to Crimes and Misdemeanors. When you've already made one full-length masterpiece of a movie examining the ideas of infidelity and self-preservation, do you really need to make a second one? And does that second one have to stretch to an interminable two hours and 40 minutes? The film goes on far too long and progresses far too slowly. In the final 30 minutes or so, Match Point finally kicks into high gear and hearkens back to Woody Allen at his best: darkly funny, suspenseful, nonjudgmental. But while those final few minutes are exhilarating, they are not innovative.

The singular shot of Match Point is the film's opener: a tennis ball smacks the tape and pops up into the air, hovering in a breathless moment. It's a wonderful metaphor for Allen's thematic obsessions; he wants to examine what happens when that ball is in the air and we must make our choices, guided by luck, morality, instinct, whatever. It's a visual cue he returns to later in the film with great success, and it almost all works. But if Match Point was meant to be a baseline winner, Woody clips the tape and the ball falls back into his own court, to the good-natured groans of the adoring crowd.