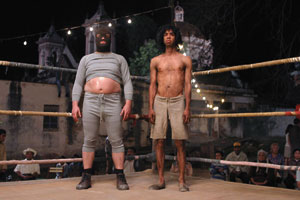 Napoleon Dynamite was the product of a sick, sublime mind. Two sick, sublime minds, to be exact ' the husband-and-wife team of Jared and Jerusha Hess. Out of nowhere, Dynamite blew up in 2004, with an awkward cast, a retro palette and a script as humorous as it was bizarre. Napoleon and his misfit crew of friends and family made audiences snort with amusement, even as they shrugged their shoulders in bemusement. It was, quite possibly, the strangest surprise blockbuster ever.

So it stands to reason that, for their follow-up project, the Hesses would wind up working with Jack Black, he of the parody musical group Tenacious D and about a thousand movies that let him mug for the camera and unleash his weird comic intensity (High Fidelity, School of Rock). True to his membership in the mad-comic brotherhood (Jim Carrey, president; Will Ferrell, secretary/treasurer), Black holds together the silly, flimsy script of Nacho Libre with funny fervor.

Ignacio (Black) is a Mexican orphan ' well, half-Mexican, half-Scandinavian ' whose dreams of donning a mask and stepping into a wrestling ring to become a wealthy, worshipped luchadore are beaten out of him by the friars. Almost.Years later, pushed to his limit as he cooks for the orphans and pines for Sister Encarnacion (the impossibly beautiful Ana de la Reguera), Ignacio begins to sneak out, teaming up with human string-bean Esqueleto (Hector Jimenez) in a quest to fulfill his lifelong dream. There is much prancing and flatulence and even more general weirdness. The phrase "stretchy pants" is used at least twice to great comic effect.

As you have probably guessed, what makes Nacho Libre a winner is not its story. Black acts with abandon, making things funnier than they should be. The supporting cast of unknowns (save Mexican star de la Reguera) only heighten his hilarity. And as with Napoleon Dynamite, Nacho Libre's strongest suits are Jared Hess' unerringly original directorial eye and he and his wife's truly strange sensibilities. To say the Hesses are a breath of fresh moviemaking air is to understate the odd visual beauty of their films. They are absurdist virtuosos, which in the world of low art is the highest compliment.

Lake Woebegone
In The Lake House, love hurts. Like a migraine.

It's a good thing we've been told for years how much we like Sandra Bullock because, wow, is she a downer in The Lake House. Miss Congeniality herself sheds the bouncy smile and perky quirks to play the dour Kate Forster, a workaholic doctor as gloomy as a gray Chicago day. When first we meet Kate, she is leaving a glass house on a lake ' the place, she says, where she has felt most herself. In the mailbox by the dirt road, she leaves a letter for the next tenant, who it turns out is an architect named Alex (Keanu Reeves). He promptly answers her ' a strange correspondence made stranger by the fact that Kate is in the year 2006 and Alex is in the year 2004. As the two lost souls (Kate has control issues, Alex daddy ones) write to each other, they begin to fall in love. But will they ever meet?

Bullock may actually only be a victim of her own talent. She has, of late, discovered her inner drama queen. (A good thing because that could very well mean no more stupid slapstick beauty pageant comedies.) Consider her scene-stealing performance in the Oscar-winning Crash, where she packs the lion's share of the film's pathos into a single hug. Here she is mopey and monotone, so much so that we wonder what Alex sees (reads?) in her. Still, she has her moments ' in one scene, Agresti trains the camera directly on her face as she receives tragic news. Her fragility ' the cock of her head, the dying light in her eyes ' is breathtaking. Reeves is at least as compelling, more comfortable in his own acting skin than he's ever been, as a man on such a mysterious mission. But for all their effort, something at the heart of The Lake House is lacking.

The movie's conceit is a clever one and, frankly, made for a stunningly interesting summer movie preview. But David Auburn's script, based on the Korean film Siworae (also known as Il Mare) written by Eun Jeong-Kim and Ji-na Yeo, never moves past the preciousness of its central idea. The only depth we are offered is the yawning chasm that is a serious contemplation of the film's explorations of linear and non-linear time concepts and a little dabbling in the concept of connection. And that way madness (and a migraine) lies. Argentinian director Alejandro Agresti does little to add heft to the proceedings, mixing cutesy split-screen shots with strangely focused frames for an overall uneven feel. He films architecture, however, the way Hitchcock filmed women: lustfully, clinically, unforgettably. Too bad Agresti's people only seem to get in the way of all those beautiful buildings.

All of which makes a film about love surprisingly empty at heart. By the time the film goes where it's expected to go, audiences may find that they are simply out of time.