War delivers the occasional moment of stupid summer fun. Other than that, it's good for absolutely nothing. 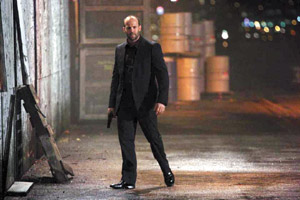 War isn't quite the clash of the titans one would expect from a smash-up summer movie pitting martial-arts masters Jet Li and Jason Statham against each other. For a film whose premise promised action, action, fight, fight, action, War is disappointingly slow, has very little striking hand-to-hand combat, and gets by with only the faintest whiffs of wit and surprise. The script has its moments, and Statham struggles valiantly to be the rising tide that would lift this foundering B-movie boat. But in the end, War is waged strictly on a second-rate level, a shoo-in for future Saturday afternoon rotation on one of those basic-cable movie stations that survive thanks to the so-bad-they're-not-quite-good films that seem to be in constant supply.

FBI agents Jack Crawford (Statham) and Tom Lone (Terry Chen) are more than partners-in-crime-fighting. They're the kind of guys who keep each other's cigarette-smoking secrets from their wives and get their families together for steaks and beers on a Sunday afternoon. When a dockside bust goes bad (after an inside informant obviously tips off the ne'er-do-wells inside the warehouse), the duo find themselves in a frantic firefight with Yakuza bad guys. Lone saves Crawford's life by landing a lucky and perfectly timed shot, putting a bullet in the cheek of the mysterious assassin Rogue (Jet Li) as he stands over a downed Crawford going in for the kill.

The melodramatic moniker "Rogue" stems from the assassin's one-time association with the CIA, before breaking ranks and switching sides to become a gun-for-hire; he conveniently and routinely goes under the knife to keep his appearance unpredictable and therefore his movements untraceable. Shot in his chameleon face, Rogue falls from the dock, disappears into San Francisco Bay and ' unsurprisingly for this genre ' lives to fight another day.

Unfortunately, that other day is a sneak-attack Sunday-afternoon appointment with Lone and his unsuspecting family, whom Rogue assassinates coldly and efficiently as payback. Already slightly obsessed with Rogue in the first place, a now-grieving Crawford torpedoes his marriage (to Rescue Me's Andrea Roth) and recommits to his job, which includes tracking down his friend's killer. Three years down the road, Crawford picks up the trail of Rogue's trademark ammunition: depleted uranium bullets in titanium casings. He follows Rogue right into the heart of a Yakuza-Triad organized-crime turf war between the Asian-based Shiro clan (led by Ryo Ishibashi and his demon daughter Devon Aoki) and the North American-based Chang clan (led by John Lone). Crawford pursues Rogue, growing frustratingly close only to continuously fall behind as the lethal killer fans the ever-growing flames of the warring clans to his own personal benefit.

Statham (Snatch, Crank) and Li (Fearless, Romeo Must Die) have appeared together once before, in 2001's The One. In that James Wong-directed film, the matchless Li finally found something of a match: Parallel universes allowed the Chinese martial arts star to fight versions of himself, with policeman Statham in hot pursuit. How does it get better than that? It gets better in the potentially more exciting fight scenario of the fluid, feral Li taking on Statham, the snarky Guy Ritchie stalwart turned adrenalized action star of the surprise-hit, absolutely fun and transporting Transporter series. Unfortunately, that smackdown scenario remains still only in the realm of possibility.

There is no big face-off between the two stars, only fleeting encounters. In that regard, War promises much and delivers nothing. Make no mistake, there is much violent action in the movie that tries to take the place of that tantalizing title fight, but none of it is well-filmed, none of it well-choreographed and very little of it is hand-to-hand. Director Philip G. Atwell, previously the director of Eminem and 50 Cent videos, prefers guns and swords. And even then, he short-circuits the scenes that should be the centerpiece of his film, making dizzying jump-cuts in the more extended action scenes and shoving shorter ones into cheesy '80s-era montages. So what War winds up with is an excess of stored energy with no satisfactory outlet.

Statham brings his usual wry ferocity to Crawford, injecting a bit of juice into the film's mostly leaden, overly complicated script. Newcomer screenwriters Lee Anthony Smith and Gregory J. Bradley have a little fun here and there with one-liners and almost-snappy dialogue, but mostly get bogged down in Rogue's Yojimbo-esque machinations. And then, like a little late-summer surprise, the story takes one fairly creative twist that reignites audience interest for the film's final frames. And yet, like that ultimate showdown that we expect but never get, it is simply much too little much too late. There is unrealized potential in War ' and even more in Statham. Both were just in need of a director and a script with more flair and finesse. Oh well, you win some, you lose some.