The Exorcism of Emily Rose takes the possibility of demon possession to court, but the cinematic case fails to stand on its own merits. 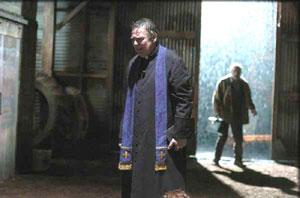 Demon-possessed or psychotically epileptic? The Exorcism of Emily Rose is the inspired-by-fact tale of a young woman who was most definitely one of these unfathomable things. "Emily Rose" (actually a German girl named Anneliese Michel) died while in the care of a parish priest, shortly after a failed exorcism, and her case wound up in the hands of civil authorities who chose to prosecute the man of the cloth for negligent homicide. In the priest's defense, his lawyer daringly (and desperately) decided to put the whole notion of demon possession on trial. Wasn't it possible, after all, that the priest had been right?

Emily seems like a normal girl; she lives in a wind-battered, solitary farmhouse with her poor but hardworking and devoutly Catholic family. She jumps on the quilt-covered bed with her younger sisters when she receives a letter informing her that she has been awarded a college scholarship. But once at the university, strange things begin to happen to Emily. Her dorm room is tossed by an invisible intruder as she watches; she is attacked in her bed by an unseen force that chokes her and weighs her down; everywhere she looks, she sees people whose faces melt like candle wax; and most disturbingly, a friend witnesses her horrible physical contortions, sometimes accompanied by a ravaged, otherworldly voice.

Don't be fooled by this description or by the spine-tingling trailers: Emily Rose isn't a horror movie, so much as it is a movie about horror (and a movie horribly put together, but more about that later). The scenes of Emily's various afflictions are raw and scary. The remainder of the movie, set mostly in a courtroom, is too frequently neither. Writers Paul Harris Boardman and Scott Derrickson (who also directs the film) have joked that theirs is the first courtroom horror film, and they are probably right. The action begins after the death of Emily (Jennifer Carpenter), as Father Moore (Tom Wilkinson) is jailed for his role in her death. Rising attorney Erin Bruner (Laura Linney), fresh off an against-all-odds acquittal of a suspected murderer, is tapped by her hotshot law firm to negotiate a plea bargain that won't embarrass the archdiocese. Moore, however, refuses, and Bruner soon finds herself in the legal battle of her life ' not to mention the spiritual one as spooky things begin to happen in her oh-so-drab apartment.

The film intercuts these early-morning episodes, present-day courtroom testimony and jailhouse conversations with flashbacks of Emily's suffering. The troubled girl's inner demons are put on display. Medical experts testify that she suffered from epilepsy progressed to the point of psychosis and that when she stopped taking her medication, all was lost. Bruner finds a Yale-trained anthropologist (an affected and unconvincing Shohreh Aghdashloo) to argue that possession is a viable explanation for Emily's behavior and that her even taking the epilepsy medication in the first place could have caused the exorcism to fail.

The scenes of Emily's "possession" are grippingly filmed, their palette a perfect '70s horror flick facsimile; Jennifer Carpenter (White Chicks) delivers a frighteningly realistic portrait of mental and physical torture. But the film is poorly put together. Fill-in scenes are easy to spot; just watch the color of Linney's hair change colors. The courtroom scenes are exceedingly bland and beige; if the filmmakers were trying to achieve contrast, they failed in not investing enough artistic vision in that half of the movie. When the scenes sing, it is thanks to the peerless Linney, her agnostic attorney slowly realizing that there are quite possibly more things than she dreamed of in her philosophy. Linney plays smart-but-uncertain better than just about anyone else, and she's comfortable in the courtroom format (Primal Fear).

Wilkinson, then, is the film's greatest flaw. His Moore is too dour, too menacing. Other than Emily Rose, he is the movie's strongest believer, but he's also the film's most unbelievable character. The impact of the early possession scenes ' and of the more revealing courtroom confessions ' is frittered away by Wilkinson's boogeyman melodramatics. As a result, a film that deals with such an ambitious subject ends up feeling small and cheap. And that's just a sin.