Leonardo DiCaprio turns in an Oscar-caliber performance in the action thriller Blood Diamond. 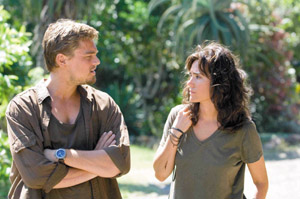 This holiday season brings us a movie with a really big diamond, disastrous surroundings and Leonardo DiCaprio frantically running all over the place. It isn't Titanic 2, but Blood Diamond, a film in which DiCaprio cements a banner acting year. This is a superb action adventure vehicle with enough political intrigue to give it more depth than your average Hollywood movie where things get blown up. Set in 1999 Africa, where prison labor is being used to mine diamonds to fund wars, Blood Diamond proves to be one of the more exciting movies of 2006.

In a role that requires him to utilize a rather convincing South African accent (those accents make The Academy voters' mouths water), DiCaprio plays Danny Archer, a greedy diamond smuggler. During a short stay in jail, he discovers that an African fisherman named Solomon (Djimon Hounsou, who tears up the screen with his performance) has discovered and hidden a rare, very large diamond. Solomon found the diamond after being taken from his family and forced at gunpoint to mine the Sierra Leone diamond fields. While his wife and younger children wind up in a refugee camp, his son Dia (Caruso Kuypers) is taken prisoner and drafted into a rebel army.

Archer gets Solomon freed, and the two set out to find the diamond that will help Solomon in his quest to find his lost family and perhaps get Archer out of the hornet's nest and to a safer country. Along the way, Archer encounters American journalist Maddy Bowen (Jennifer Connelly) and some sparks fly. The newfound love interest and Solomon's quest to find his family create some emotional conflict for the money-minded Archer, who just wants to make a big score and get out of town.

Blood Diamond is directed by Edward Zwick, who made the excellent Glory and very good The Last Samurai. Those films were action adventures with a soul, and Blood Diamond falls comfortably into that category. While no single film could do justice to the many subjects being explored here, and this one probably throws a few too many logs onto the fire within its running time, it unequivocally reveals a dark side of the diamond industry.

While many actors would've turned up the machismo and one-liners for the role of Archer, DiCaprio treats him as a conflicted, sporadically compassionate ' albeit vicious ' fellow. Archer's greed stays with him for the entire picture, yet part of him feels the need to blow the lid off the evil company that purchases diamonds from him ' a company well aware that many people died finding them. A tense scene where Archer informs Solomon that he will kill him if his actions threaten his life is one of the better scenes DiCaprio has ever turned in.

Connelly is given comparatively little to do, but she does it winningly. And the scenes involving Dia and his indoctrination into a rebel army are well handled, and could have been the basis for an entire movie.

So, will DiCaprio get nominated for some Oscars this year? While Blood Diamond features a performance from him that certainly deserves a nomination, it's actually his second best performance of the year after his work in Martin Scorsese's The Departed. Hopefully, Leo won't cancel himself out, because if the next Oscar ceremony doesn't consist of him sitting in the audience with his fingers crossed, that would be a crime.