Mission: Impossible III flunks the testosterone-action-flick test, but somehow its now-controversial star reminds us why we liked him in the first place. 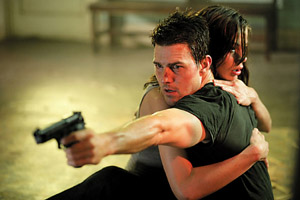 Can it be that while Tom Cruise has been self-destructing as a public figure, he's also been reaching some new level as an actor? Turns out it's not impossible.

Let's face it. Even lifelong fans have had a hard time standing by their man in light of the past year's cradle robbing and couch jumping. When Brooke Shields smartly smacked Cruise down for his insensitive, insulting and just-plain-weird comments about postpartum depression, many of us secretly cheered. And in all his insistences that he knows more about psychiatry than a morning show host, it was hard not to see a man protesting just a wee bit much. Were the toothy grin, the cocky swagger, the studied intensity, the likable arrogance really gone forever?

The impossibly punctuated Mission: Impossible III says it isn't so. Cruise's most recent works (The Last Samurai, Collateral) showed signs of a real actor being born, someone not trading solely on charm or audience appeal. He still loved to flex that jaw muscle and smolder that stare, yes, but he was suddenly an artistic collaborator, unafraid to stand ever so slightly in the shadow of a Ken Watanabe or a Jamie Foxx. And he was becoming a better actor for it. Samurai showed his depth, and Collateral showed his darkness. What would he show us next?

Unfortunately, it was a shockingly unattractive side of his personality. Was his loopy lunacy for real? Was it all for show? Is it ever going to stop? The Cruise meltdown was funny for five minutes, then it got really sad, and now it's just boring. Thank heavens we finally have a movie to talk about. Not a terribly great movie, but a movie nonetheless ' and one in which Cruise manages to fuse his fledgling-actor self with his movie-star-maniac self to surprisingly satisfying ends.

The Impossible franchise has been, well, impossible. The first installment, directed by Brian De Palma, was a terrible confusion, equal parts plot hole and amazing action sequence. The second, helmed by the incomparable John Woo, was equally stupid on script but oh-so-smart on visuals. This third film, co-written and directed by small-screen phenom J.J. Abrams (Alias, Lost), was supposed to reverse the trend, creating characters and story lines that actually resembled a plot before plunking them down on an exploding bridge. The problem is that the characters and story lines bear too strong a resemblance to those of Abrams' action-oriented hit television series Alias. As a result, M:I:3 is what it would have looked like if Tom Cruise had guest-starred alongside Jennifer Garner. The film is a too-big version of Alias, yet remains too small for the multiplex.

Tiresomely typical of Abrams, the film starts at the end. We see a positively reptilian villain (Philip Seymour Hoffman) threatening a bloodied, handcuffed Ethan Hunt (Tom Cruise) and his love interest Julia (Michelle Monaghan) over the whereabouts of something called "the rabbit's foot." Then, in a squeeze of the trigger, we are catapulted back to the beginning to endure the story's too-often ponderous progress. Super-spy Hunt has retired from the field, acting as a trainer for the Impossible Mission Force (IMF) and settling down as a regular, Volvo-driving, Virginia-suburbanite guy. He's lured back into the fray when one of his trainees (Keri Russell) is captured. Events escalate, and he finds himself on the trail of Owen Davian (Hoffman), as bad a baddie as there is. Along the way, he's trying to keep his old life a secret from Jules while also navigating the internal politics of the IMF as embodied by his morally ambiguous handlers, Laurence Fishburne and Billy Crudup. With all the bad-guy switcheroos and paranoia, the set's frequent fluorescent-green glow, the city-streets-as-maze and the too-long Tom Cruise running scenes (so what if they made Garner a star?), M:I:3 screams, "Color me Alias."

Abrams' action sequences disappoint. The murkiness and speed of the shots is perhaps supposed to approach realism, but frequently make things too hard to see and sometimes render dialogue too hard to hear. Those tired doppelganger masks (the ones that, in this case, turn Cruise into Hoffman at one point) make another appearance, a recurrence made slightly less annoying by Abrams' stylish direction of related scenes. In the end, though, the only thing that really works is Cruise.

For the first time, Cruise brings a humanity and a passion (go figure!) to the larger-than-life Hunt. He navigates the physicality of the role with his usual gonzo glee, but he also layers his performance nicely with touches of regret, rage and fear. His Hunt is just complicated enough to be interesting, while the film around him manages to be too complicated to be interesting. In this blockbuster of a brokedown film franchise, maybe a fourth attempt will reach the middle ground because the third finds that task impossible.