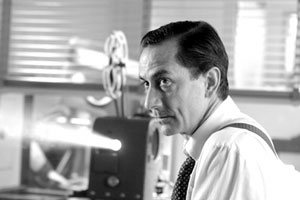 A weary Edward R. Murrow stares morosely off into space. He takes a drag off a now-short cigarette, the shadows around him filling with toxic ephemera as he slowly exhales. A chanteuse wails a melancholy tune.

There is an undeniable romance to George Clooney's sophomore directorial effort, a love of smoke-filled newsrooms and the witty, wise men who inhabited them back in the day. It's a lesson no doubt learned at the knee of his newscaster father. Still, Good Night, and Good Luck has somehow been pegged ' undeservedly ' with a civics-class-film-strip reputation. Yes, Clooney tells the true tale of the epic air-wave battle between journalist Murrow and Sen. Joseph McCarthy and uses mostly historical transcripts and archival footage to do so, but Good Night, and Good Luck is livelier and more important than that. Steeped in seriousness and smarts, Good Night, and Good Luck plays like a fact-based film noir. And anyone who thinks this film is just about McCarthy is missing the larger, more thought-provoking point.

Revisiting the McCarthy era is a sure way to start trouble. The then-junior senator from Wisconsin made his claims of communist infiltration of the U.S. government in the early 1950s, igniting a firestorm of politics and passion that at times still seems to threaten the American experience. Don't believe it? Type his name or even the name of this film into an Internet search engine and follow the trail of Google gunpowder to its high-tech detonation point: chat rooms where self-proclaimed liberals and conservatives denounce, defend, deride. And no sooner do you think you've perhaps stumbled across the threads of a decent discussion about truth and the media, than it quickly degenerates into name-calling, insults, cracks about FOX/Faux News and a long line of offensive posts deleted by an administrator.

Why? Because, no matter which side you take, whether you believe there were active communist agents in the government or not, you cannot reasonably argue that the McCarthy era was about anything other than fear and cultural claustrophobia. It marred the American soul with its aggression and its divisions, bringing the constructs of the Cold War into neighborhoods, friendships, families. National security vs. individual freedoms. Protection from communism vs. protection of civil rights. Us vs. them. Only we were us, and we were them. And so the fear built into a frenzy whose instrument was the House Un-American Activities Committee. And the face of HUAC was McCarthy, the man who started it all.

That's the McCarthy side of things, a side Clooney wisely leaves unadorned. Historical figures (McCarthy, Army attorney general Joseph Welch) are not dramatized, but shown in authentic footage efficiently spliced into the flow of the film. All of Clooney's considerable artistry, then, is reserved for the Murrow side of things, the movie's true focus. There's really no narrative to summarize; Good Night, and Good Luck is simply a fascinating series of behind-the-scenes scenes, detailing the decision of one newsman and his loyal coworkers to fight the network and the nation to, here's a concept, do the right thing.

David Strathairn, perhaps best known for his work with director John Sayles in such films as Matewan, Passion Fish and Eight Men Out, carries the film with his understated manner. There aren't many big scenes, but there is big acting: the lift of an eyebrow, the slump of a shoulder, the sorrow at the loss of a friend (a convincingly jittery Ray Wise) driven to suicide by a red-baiting columnist. Strathairn is steady and stoic and mesmerizing. He is matched by the marvelous Frank Langella as CBS head William Paley, an intimidating titan torn between Murrow's passion and his network's business interests. Together, the two are a study in the complexities of the Fourth Estate.

Good Night is, at heart, a discussion of the definition of news. It's a reminder that the best, most vital reporting is free of corporate interest, unafraid in the presence of power and able to provide context. Was McCarthy powerful? He still is. Did Murrow go after McCarthy? You bet he did. He saw a side of the story that no one else had the courage to confront, not even the president of the United States. Was Murrow "fair and balanced"? Clooney and scriptwriter Grant Heslov dispense with that facile, hackneyed idea as easily as their hero did. Murrow always allowed McCarthy to respond, but that never meant that he stopped fighting what he saw as a gross misuse of a political pulpit. He suffered personal attacks, lost sponsors and eventually found himself relegated to a sleepy Sunday-afternoon time slot as a precursor to retirement. But he went down swinging, in the name of the public interest, because he believed in the intelligence of his viewers. He wasn't telling them what to think; he was just telling them to think. He understood that while nobody owns the truth, we all own the fight for it.

This masterful, not-to-be-missed movie makes you wonder what ever happened to that kind of network news.