Director Spike Lee takes a typical bank heist tale and makes it as much about power and politics as any big-time payday. 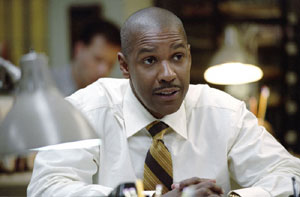 Spike Lee is the crazy street preacher of American cinema. Not even Oliver Stone, that marvelous madman who has devoted his overblown oeuvre to ferreting out national conspiracies and corruptions, dares to stand quite so far out in busy intersections, waggling his fingers and shouting damnation at passersby. Despite the shark-infested commercial waters they swim in, Lee and Stone share that granddaddy of all artistic excesses: a genuine lack of interest in their audiences. Lee, particularly, rarely reins himself in; he seems perfectly content simply to sermonize to the high heavens, turning a blind eye to everyone who's crossing the street to avoid being skewered by his stare or being flecked with his self-important spittle. He's never really seemed to learn the lesson that he could show us instead of telling us ' or, in his case, instead of yelling at us and jumping up and down on the pavement.

He's had his moments. There has always been a startling spark to his direction and his writing, an energy and intelligence that embraces and engages thinking audiences. And he wants to talk about important things ' race, class, power ' in a visceral, stream-of-consciousness way that hardly anyone else seems to have the desire to bring to that kind of cultural discussion. But once he's got our attention, he all too often bludgeons us with it, forgetting to be the kind of subtle storyteller that can stun audiences into self-aware silence. Unfortunately, up until now, it's only been in lesser-known films like Clockers and Summer of Sam that he's managed to make huge statements without resorting to his usual level of visual and aural assault and battery. And nobody really talks about those Spike Lee movies, do they? Inside Man might change that.

Dalton Russell (Clive Owen) is a criminal mastermind. He says so himself, speaking directly to the audience in the movie's opening moments. The close-up is so tight Owen might as well be gripping the camera and climbing on through. It's a marvelous use of the Brit's considerable charisma and a wholly innovative crime-drama narrative approach. The bad guy is basically daring us to look deeper, to try to figure him out, and that gets us thinking about motive ' his own and everybody else's, too. Lee then takes a quick ramble around a Wall Street bank's lobby to create a sense of the polyglot patrons in play before Russell and a well-masked handful of accomplices bust in and holler "hold-up." Right from the beginning, these aren't average everyday bank robbers. Russell announces his presence to a beat cop (Victor Colicchio) on the street outside, bringing the wrath of New York's finest to the doorstep of his heist. He puts all the hostages in the same overalls and masks he and his cohorts wear. He begins to systematically confuse them (and us), using blindfolds, gags and separation into constantly revolving small groups, random movement of certain individuals from room to room. And he wanders around the wide-open vault without so much as a backward glance at the stacks and stacks of cash, while his accomplices dig a hole in the branch's office-supply store room.

Meanwhile, Detective Keith Frazier (Denzel Washington) and his partner Bill Mitchell (Chiwetel Ejiofor) are the outside men, NYPD hostage negotiators tasked with bringing the standoff to a peaceful end. Frazier's a serious cop hellbent on promotion but facing questions about major money missing from a previous bust. He takes charge of the scene like he's taking hold of redemption and starts working Russell, but soon finds himself being the one worked ' by the maleficent Madeline White (Jodie Foster), a woman with city government connections hired by bank president Arthur Case (Christopher Plummer) as a kind of fixer. There's something in the bank Case wants protected at all costs, and it's not his money or his clients. By the time we start to figure out where this is all going and what everybody wants, we're a little like the cops in that we're not sure we can tell the bad guys from the good guys any more. They're all dressed the same.

It's a smart script. There are plenty of plot points easily figured out and a few too many implausibilities never fully explained, but first-time film writer Russell Gewirtz (TV's Blind Justice) plays excellent interference by keeping the suspense building and crafting fascinating characters. For much of the film, Lee stays out of his own way, shooting such a beautiful, intricate film (reminiscent of its touchstones Serpico and Dog Day Afternoon) that it makes his rare gimmicky lapses forgivable, even the tacked-on, weirdly Walter Mosley vibe of the final scene. The often overrated Washington is at his most comfortable (and successful) with Lee. Foster steals every scene. And a movie about a bank robbery ends up touching on issues like prejudice, complicity and the price of power built on the back of someone else's suffering.

In the end, it's too bad that no one told composer Terence Blanchard this wasn't a typical Spike Lee film. His score is intrusive and bombastic, its bass line sounding at times like it was plucked from the early Xanadu scenes of Citizen Kane or some melodramatic 1940s Egypt movie. It serves as a constant reminder of how very un-Spike Lee Inside Man really is. And that's why it works as well as it does.