Freeloading free spirit Owen Wilson strains the bonds of friendship when he moves in with his newlywed pals in You, Me and Dupree. 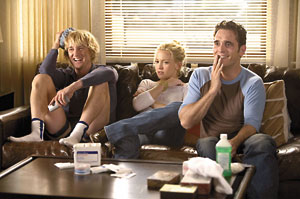 You, Me and Dupree is not as stupid as it looks. Don't be fooled, it's plenty stupid. It's just that it's a lot sweeter than you'd imagine.

First-time screenwriter Mike LeSieur gives us a silly story that, at first blush, seems quite familiar. Boy meets girl, boy marries girl, boy is forced to ditch all his old friends when girl is horrified by them. One has to give LeSieur credit for scrambling the formula a bit. In You, Me and Dupree, it's more like boy meets girl, boy marries girl, boy's down-and-out best man moves in, girl and best man almost become better friends than boy and girl, causing much marital angst. Oh, and girl's crazy father (who happens to be boy's boss) keeps popping up just to make things good and complicated.

As the zany Randolph Dupree, Owen Wilson tries to capitalize on his famous rambling/mumbling charm. He's a goofy kid in a goofy man's body ' can't keep a job, can't keep catastrophe from following him around. He's the ultimate high-maintenance friend; he'll almost burn down your house, but he'll make you a really nice, gourmet apology dinner. Like Dupree, Wilson's charm only gets him so far, and that's about halfway through the movie. He's too hammy and too satisfied with his own silliness.

It's kind of depressing to see Academy Award-recognized talent trying to match him, smirk for smirk. Kate Hudson has made a bevy of bad choices (Le Divorce, The Skeleton Key) since her Oscar win for Almost Famous; perhaps, though, she's found the truest level of the thimble full of talent she's actually got because she's the sweet and sane center of Dupree.

Matt Dillon (Oscar-nominated for last year's surprise winner Crash) is the bigger disappointment. He's not a comedic actor, and somebody needs desperately to tell him to stop trying to be one. With his severely slicked-back hair and harried up-and-comer scowl, he brings to mind Michael McGlone's obnoxious Franny from Edward Burns' She's the One, only not as frantic and not nearly as funny. And then, there's Michael Douglas (who won an Oscar for Wall Street), whose twilight-years oeuvre has morphed from playing the part of a man being chased by sex-crazed women (Disclosure, Fatal Attraction, Basic Instinct) to crazy-father roles (The In-Laws). (So glad to see he's stretching as a performer, but guess what? He's not amusing either. Ever.)

And yet, for everything that's wrong with Dupree, there are a few funny moments, a few funny friends, that make the movie not the worst way to spend a long, hot summer afternoon. Dupree is a friend that's fun to hang out with, but you wouldn't want to take things any farther than that.

Who hasn't worked for a Miranda Priestley? There's always that one venus flytrap of a boss, an occupational omnivore who requires not just skills, but souls, too. An employer who does indeed become the boss of us, morning, noon and night, with ridiculous demands and spur-of-the-moment inspirations. Admit it ' author Lauren Weisberger's devil is one we all know, Prada or no Prada.

Weisberger's 2003 smash book, The Devil Wears Prada, tells the story of young Andrea Sachs, an aspiring writer, who lands the job "a million girls would die for" ' assistant to Miranda Priestley, all-powerful editor of Runway magazine, feared fashion maven, completely insane person. The tale follows the serious-minded Andrea as she learns to negotiate the treacherous oceans of Miranda's mood swings and manipulations as well as the foreign lands of haute couture. But Devil is no more about fashion than Lord of the Rings is about jewelry, rumors that Priestley is a thinly veiled send-up of Vogue's Anna Wintour notwithstanding. Weisberger's story is about maintaining a sense of self and professional purpose in a workaday world aimed at driving its drones to exactly the opposite state of mind. Still, the book was no prize, a kind of cotton-candy beach read whose popularity far outstripped any of its actual artistic value. So, of course, a movie version was soon called for.

Screenwriter Aline Brosh McKenna (Laws of Attraction) only loosely adapts Weisberger's work. Because evil is always more interesting than good, McKenna adds heft to the character of Miranda (Meryl Streep) and severely shaves down those of Andrea's pre-Runway friends (Adrian Grenier, Tracie Thorns). The first part of the equation works because Streep is absolutely divine as Miranda, her insults delivered in pleasantly modulated tones, her diamond hardness nuanced by a stark self-awareness. The second part, though, screws up the story's premise, which is that Andrea (a still gawky, but coming-into-her-own Anne Hathaway) would be so much better off ditching her simultaneously-glamorous-and-demeaning job and going back to her friends and their ideals. One look at the cardboard cutouts that people Andrea's personal life, however, and it's easy to rationalize that maybe Miranda's not all that bad.

In the end, the movie works slightly better than the book does, but stays pretty much the same fun: enjoyable and not all that good. Because Streep elevates whatever materials she touches, however, easily sidetracked summer audiences shouldn't hesitate to make a date with this Devil.