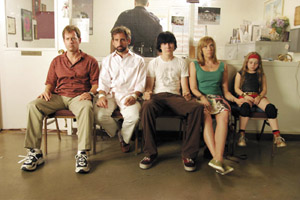 Leo Tolstoy famously opened his elegant Anna Karenina with the following observation: "Happy families are all alike; every unhappy family is unhappy in its own way." Ain't the second part of that thought the truth?

Little Miss Sunshine's Hoover family demonstrates dysfunction par excellence. Dad Richard (Greg Kinnear) is determined to make a go of it as a self-help guru; at the film's beginning, he peddles his nine-step program ' "Refuse to Lose" ' to a half dozen unenthusiastic people, who aren't exactly refusing just yet and who stare at his overhead-projector illustrations in silence. Determined to make that one big break happen, he persistently hectors agent Stan Grossman (Malcolm in the Middle's Bryan Cranston), leaving messages asking about "the deal" Grossman is going to help him put together. Mom Sheryl (Toni Collette) works too hard making up for Richard's weaknesses in the family-provider category; she sneaks smokes in the car and brings home buckets of chicken for supper. She also assumes responsibility for her suicidal brother Frank (Steve Carell), whose love life and career have taken a simultaneous and excruciatingly intertwined downturn. A blank Frank is brought home to the Hoover house to face Grandpa (Alan Arkin), whose dirty mouth matches his drug habit, and kids Dwayne (Paul Dano) and Olive (Abigail Breslin). Dwayne, a semi-sullen Nietzsche devotee, has taken a vow of silence until he achieves his lifelong dream of acceptance to the Air Force Academy. Olive spends her days in the basement, rehearsing for the beauty contest she is sure she will one day win.

To leave their family portrait there, though, would do an unforgivable disservice to the warm and wonderful first film from directors Jonathan Dayton and Valerie Faris (best known for their work on music videos and documentaries and commercials) and screenwriter Michael Arndt. Little Miss Sunshine is the perfect combination of sweet and sour. No charlatan, Richard really believes his nine steps reveal the path to a hipper, happier life. Sheryl is frazzled and her nerves are fried, but she genuinely loves her kids and worries about her brother. Frank is clinically depressed, but he's almost instantly simpatico with Dwayne, establishing a what-fresh-hell-is-this rapport right away, and he's sweet to Olive when she innocently questions the bandages on his wrists. Grandpa might do coke in the bathroom, but he spends time with Olive choreographing and rehearsing her beauty-contest talent routine when the rest of the family is too busy to notice. Dwayne is silent, but not implacable; he's obviously smart and tons more likeable than your average mouthy movie rebel. And young Olive is filled with all the exuberance of youth: in her happy-kid head, suicide simply doesn't compute, and we all have a shot at winning the title of Little Miss Sunshine.

And to top it all off, the family agrees as a whole to accompany her on exactly that quest when a phone message from her aunt reveals that she's been selected to compete. Granted, no one is very happy about it, but they still make it happen, piling into the beat-up yellow VW van to drive the several hundred miles to Redondo Beach. To talk about the ensuing road trip in the slightest would ruin the film's funniest moments. Suffice to say that the Hoovers hover closer to those wacky Vacation-ing Griswolds than to the Royal(ly annoying) Tenenbaums. Nothing goes according to plan, thank the comedy movie gods.

The beauty of Little Miss Sunshine is twofold. First, the casting is genius across the board. Smart, sarcastic, sentimental Kinnear (The Matador, As Good As It Gets) is the unsung hero of just about every movie he's in. Collette (The Sixth Sense, The Night Listener) has gotten quite good at playing a woman on the edge without resorting to cliche or camp. And in Frank, Carell, probably best known for TV's The Daily Show and The Office, has very nearly mastered a marvelous comedic monotone.

The second part of Sunshine's charm is that it never tries too hard. It's a very simple story of a family a little like yours, maybe a lot like mine, and not so very different from the neighbors down the street. They bicker, they breathe deep, they lash out at and stick up for each other. Basically, they just try to do the very best they can. And watching them, it's amazingly easy to embrace their dysfunction and grow quite fond of it. Turns out it's not so different from our own, after all.