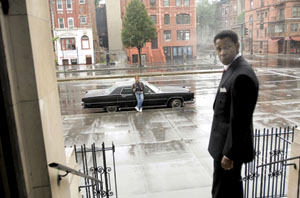 From the outside looking in, it would be understandable to initially confuse American Gangster's good guy and its bad guy.

The well-heeled family man attends church on Sundays with his mother, regularly gathers his relatives to fancy feasts around his perfectly appointed dinner table, generously involves himself in shaping the future of a talented nephew and generally tries to live a comfortable life out of the limelight. He is successful, savvy and well-loved.

The other man, a scrappy, schlumpy social climber, can't make time for his kid, chases just about every woman he comes across and antagonizes just about every man, and eats alone in his apartment, crushing fistfuls of potato chips onto his white-bread tuna sandwiches. His best intentions usually just come back to bite him, and his complicated loyalties inhabit an unusually gray moral landscape.

The family man, however, is the killer, a callously entrepreneurial heroin magnate named Frank Lucas. His carefully crafted, socially acceptable façade is built on the wasted lives of the junkies he services. The rough-around-the-edges troublemaker is Richie Roberts, the undercover New Jersey narcotics investigator who stumbles onto Lucas' path and ultimately dismantles his insane, ingenious drug-smuggling scheme.

Lucas had two success secrets: his smarts and his ability to stay off the radar of law enforcement. Until, that is, he showed up to the center-of-attention Ali-Frazier fight in a chinchilla coat and hat (gaudy gifts that he wore to please his wife) and sat in better seats than any of the known-quantity gangsters. For Lucas, the clothes unmade the man. Suddenly, cops ' the good ones (Russell Crowe's Richie Roberts) and the bad ones (Josh Brolin's New York police detective Trupo) ' were scrambling to find out about Frank. While on-the-take cops like Trupo tried to figure out how to get their piece of Lucas' pie, Roberts assembled a team of undercover investigators as painfully straight-and-narrow as he is and set about slowly engineering the American Gangster's ultimate fall.

Ridley Scott's film, written by Oscar winner Steve Zaillian (Schindler's List, Gangs of New York), is a procedural drama as much as it a portrait of crime and punishment. The characteristics of American Gangster's form and content closely resemble those of the men who are its focus ' relentless, ruthless, patient, intelligent, quietly methodical and then unexpectedly explosive. There is an intentionally even keel to both Zaillian's script and Scott's direction that makes the movie a rare glorification-free examination of gangster life and makes the film's staccato punctuations of violence seem as unsettling and unpredictable as they might in real life. Events unfold at a matter-of-fact pace in one of Scott's (and cinematographer Harris Savides') finer worlds of shadow and light, a film that's less about color than it is about illumination.

There isn't a single false performance in Gangster. Lucas' self-aware swagger, his constant and verbose schooling of his underlings, his unwarpable work ethic, all play to Washington's strengths as an actor.

If that's all there had been to the character, Gangster simply would have been another cinematic stroll for one of Hollywood's sleep-walking-est leading men. But there are flashes of brutality and unchecked ego, moments when the veneer comes off completely, that Washington manages to connect with; because of those, it's an award-worthy outing for the Oscar winner.

Playing against type as Roberts, Crowe softens everything ' his ego, his very force-of-nature-ness, his voice ' to the point that, in a confrontation with the crooked detective Trupo, Brolin actually seems like the bigger, more bad-ass man. Crowe surrenders his alpha-actor dominance, perhaps comforting himself with the thought that, in the end, Roberts is the only man who ultimately gets what (or who) he's after.