A new adaptation of catty novel The Nanny Diaries isn't as bad as you've heard. 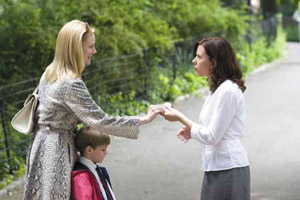 Well, here we are staring down the end of summer. It's a time when the temperatures start to diminish, the kids go back to school, and the pools get covered up. For sad movie critics, it's also known as the time when bad things happen at the cinemas. Very, very bad things.

The end of August through September is generally known as the time where studios dump their weakest efforts on the unknowing public, expelling all of the garbage heaps that have been either delayed due to creative problems or held up because they're just plain terrible. The Nanny Diaries, an adaptation of the popular novel by Emma McLaughlin and Nicola Kraus, has been delayed for quite some time and, wouldn't you know it, it's just been released. It's currently being smacked around by a majority of critics, who save their best barbs for this time of year.

But it's actually pretty good. It's good, in large part, due to the excellent cast assembled by directors Shari Springer Berman and Robert Pulcini (who made the excellent American Splendor). While this picture didn't blow me away, I was mildly entertained the entire time, and it's much better than the typical late August cinematic nightmare.

Scarlett Johansson, who I wish would stay away from Woody Allen, plays Annie, an aspiring anthropologist. She wants to study bones and cultures and whatnot, but her mom (Donna Murphy) wants her to be a businesswoman. After a chance encounter with one Mrs. X (a devilish Laura Linney) in New York's Central Park, she finds herself landing a job as her nanny. She keeps this a secret from mom and moves into Mrs. X's plush residence.

Mrs. X, as it turns out, is a satanic boss with a jackass husband (Paul Giamatti) who cheats on her and displays zero parenting skills. Her son Grayer (good work from little Nicholas Art) is a holy terror thanks to the ever-changing nannies and always absent parents, so Annie has her work cut out for her. She's also not allowed to have a boyfriend, rarely gets a day off, and is stowed away in a closet-sized room next to the washing machine.

Of course, the film has a forbidden romance. Annie is caught with her pants down ' fans of Scarlett's derriere get to see it in pink undies ' by neighbor Harvard Hottie (Chris Evans). Yes, many of the characters in the film have jokey, generalized names. Evans continues to impress after his excellent work in this summer's Sunshine. He's a decent actor despite his deplorable work in the Fantastic Four films.

The movie has plenty going for it. Johansson and Art have some cute scenes together, while Johansson and Linney are quite masterful when they square off. In a small role, Alicia Keyes is impressive as Annie's best friend. Giamatti plays one of the more hateful, unforgivably immoral characters you will see in a film this year.

I suppose one of the things grating on critics is that the film isn't very funny. It has its humorous moments, but it's actually quite dark and a little depressing for stretches. There's very little fun at the X household (Linney and Giamatti have some epic quarrels), and the directors don't try to sugarcoat the battles.

Still, the film has a few visually arresting moments. Annie's umbrella flight over Manhattan is a nice ode to Mary Poppins. There's also a clever opening where factions of Manhattan society are encased in museum displays as they are being described.

The film's faults lie in its typical stereotyping of wealthy wives and their philandering husbands. The performers do a good job with the material, but little of it is surprising. The Nanny Diaries won't win any awards, and it shouldn't. Johannson, Linney and Giamatti do good work, and that's a pretty decent pedigree for any film, despite its telling late-summer release.