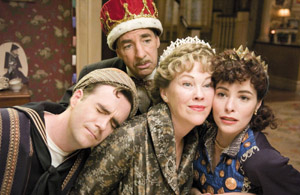 There's a moment in For Your Consideration, during a spoof of movie critics to be specific, where I just might have laughed as loud as I ever have in a theater. I was embarrassed for myself after the outburst, but I couldn't help it.

There are many moments in director Christopher Guest's latest that had me laughing out loud, most of them involving Catherine O'Hara, who finally gets the chance to own a movie, a chance she rightly deserves. O'Hara has long been one of the funniest women on the planet, and her work here as aging, paranoid actress Marilyn Hack is easily the best role she has had since her Second City Television days. I'm nominating her for an Oscar right now.

Guest does away with the mockumentary format he utilizes often (A Mighty Wind, Waiting For Guffman) and goes for straight satire, taking a rip at Hollywood and its obnoxious awards show publicity practices. During the filming of Home for Purim, this film's movie within a movie about a dying mother (O'Hara) being visited by her family for one last Jewish holiday, Internet rumors begin to circulate. At first, Marilyn seems destined for an Oscar nomination, but "Oscar buzz" begins to swarm around most of her co-stars.

Harry Shearer, one of Guest's bandmates in Spinal Tap, gets his best screen work in years as Victor Allan Miller, a once promising actor reduced to radio commercials and playing a hot dog in public. Miller's role in Purim represents a career renaissance and even earns him a chance to dance with girls a third his age on MTV. As Callie Web, a former standup comedian turned actress, Parker Posey does things that only she can do ' just wait until you see her final moment in the film, as she laughs maniacally while bathed in red light.

One of the funnier aspects of the film is that Purim is downright awful, and deserving of no Oscar buzz whatsoever. Directed by Jay Berman (a hilarious Guest) the movie features every Jewish, disease-of-the-week, gay cinema cliché in existence. Some critics have knocked Consideration a bit because they believe that no movie this bad would ever have the word Oscar associated with it. I invite those critics to rewatch I Am Sam. Purim being so bad is a direct hit on publicity hounds who manage to turn junk cinema into Oscar contenders by manipulating the media.

Other Guest mainstays score big. Jane Lynch and Fred Willard (complete with faux-hawk) are absolutely frightening as hosts of an Entertainment Tonight-like gossip program (the faces Lynch puts on at the end of her segments are priceless). John Michael Higgins, as publicity whore Corey Taft, is droll as can be, saying some of the script's more outlandish lines and somehow keeping a straight face. With all of these great performers providing laughs from many directions, it is still O'Hara who shines most. Just look at what she does with her face after the Oscar buzz starts and she must hit the talk show circuit. Her final drunken tirade stands as some of the more brazen acting put forth by any actress this year.

For Your Consideration winds up being more a spoof of media covering Hollywood than Hollywood itself. It's a vicious nuclear missile directed at the movie Web sites, material-hungry talk shows and agents who make the end of the year so ridiculous in Southern California. In Guest's universe, the actors are the victims of all the hype ' albeit willing, almost deserving victims.