While it's no home run, 'Fever Pitch' is an enjoyable afternoon at the ball park. 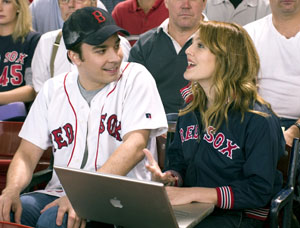 Baseball movies are always about so much more than just baseball. There's the faith-based Field of Dreams and the to-thine-own-self-be-true The Natural. With its mixture of sex, sass and sagacity, Bull Durham is about, well, everything. And now, with Fever Pitch, we have the baseball movie as couple's therapy.

Screenwriters Lowell Ganz and Babaloo Mandel pose the question asked by potential mates the world over: When it comes to our partner's diversions and distractions, is too much of a good thing an actual possibility? We all love something in a way that very well might seem odd and overboard to other people. And we all ' stamp collectors, bibliophiles, sports fans, celebrity watchers, you name it ' have seen the I-love-you-now-change look in the eyes of friends, family members and significant others when our enthusiasms cross some invisible line of decorous demarcation. But what would we be without these flights of fandom, however manic or misplaced?

Not ourselves, that's for sure. And now the less-well-adjusted among us have a movie ' however fun, foamy and ultimately forgettable ' to prove it. When Nick Hornby wrote his late-1990s soccer memoir Fever Pitch, he can't have imagined a big-screen adaptation directed by the infamously irreverent Farrelly brothers that would change the Brit's lifelong passion to America's pastime and replace his oh-so-serious literary pretensions with oh-so-silly romantic comedy cliches. Still, his biggest contribution ' a bear hug of an embrace for the insanity of the world's biggest fans ' survived the transition intact.

Ben Wrightman (Jimmy Fallon) is a good guy. He's an East Boston High geometry teacher, and his kids love him. He's polite, funny and adorable in a rumpled-jeans-and-messed-up-hair kind of way. Ben's the sort of first date not thrown for a loop when ambitious business consultant Lindsey (Drew Barrymore) answers the door in the middle of a bout of food poisoning; in fact, he's the sort of first date who puts her to bed, cleans up after her and falls asleep on the couch cuddled up with her dog.

Once Lindsey and her shallow corporate-climber friends get over the fact that he's a school teacher and "that means a small income," they start to wonder: Is this guy perfect or what? But when Lindsey asks Ben home over his spring break to meet her parents, he confesses what she should have already sussed out on her own. (She has, after all, seen his shrine/apartment; this guy doesn't do anything without a Red Sox stamp of approval, right down to his New York Yankees-themed toilet paper.) Ben, it seems, is the kind of fan who traditionally travels to Florida each year for spring training. No biggie, she says gamely, obviously still really not getting it. It's not until she spies Ben on ESPN ranking the Sox, sex and breathing (in that order) that Lindsey's outlook becomes considerably less sanguine. And that's how the rest of the movie plays out: Ben trying to be there for his girl and his team and Lindsey fluctuating between an attitude of acceptance and an attitude of regime change.

Directors Bobby and Peter Farrelly (There's Something About Mary) show their softer side, selecting a cotton-candy story with next-to-none of their usual gross-out gusto. Make no mistake, however; the film gets by largely on its leads' personal likeability. Both are, at best, minor-league thespians ' particularly Barrymore, who seems to spend the first half of the film warming up. Of course, she does have the disadvantage of playing Lindsey, a myopic meddler who for much too long can't see any parallels between her own passion for the workplace and Ben's bugginess for baseball. The script's most interesting conceit is the fact that it never caricatures Ben's Sox obsession as the boorish, beer-swilling variety, but instead treats his loony loyalty with more respect than his lover is often able to muster. No one in their right mind would side with Lindsey in the ridiculous fight that serves as the film's pivotal plot point, but Fallon manages to make us root for a happy ending anyway.

Fever Pitch's season outcome is never in question; the movie was serendipitously filmed during last year's miraculous, curse-breaking World Series run. Whether Ben and Lindsey's single status will be turned into a double isn't all that hard to figure out, either. For the most part, Fever Pitch is like a lazy afternoon at the ballpark: full of entertainment, well worth the price of a ticket ' and of little or no consequence in the race for the pennant.