In The Matador, Pierce Brosnan proves his worth is more than his Bond. 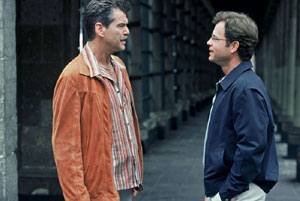 Director Richard Stewart's The Matador is a strange slice of nothingness, a delightfully quirky little film that isn't really about anything so much as its own independence. The film's sketched-out story of an aging assassin on the skids, which Stewart wrote himself, is odd and entertaining, but what makes The Matador a break-out success is Pierce Brosnan's surprisingly warm portrayal of this outrageous burn-out.

Julian Noble (Brosnan) was once a cold-blooded moneymaking machine. Mysterious bosses ' ridiculously code-named "Mr. Randy" and "Mr. Stick" ' supplied a name and a photo, and Noble efficiently and effortlessly made the subjects of said name and photo disappear. Noble's depressed now, though; he's in Mexico, it's his birthday, and he realizes that he hasn't a friend in the world. One night, he meets up in a hotel bar with Danny Wright (Greg Kinnear), a soft-hearted, struggling businessman with a loving wife at home (Hope Davis) and a more-than-slight confidence deficit. After a few missteps (brought on by Noble's completely antisocial and hilarious personality peccadilloes), the unlikely pair become friends. And perhaps, eventually, partners in crime. But after the new friends' zany romp through Mexico City, Noble develops a problem; it seems his eyesight starts to give out every time he has a new target in the crosshairs; he might have a friend, but now he's also got big problems with Mr. Randy and Mr. Stick.

Brosnan and Kinnear have better chemistry together than Brosnan and any Bond girl, in no small part due to the fact that Brosnan plays directly against type for the first time ' ever. Almost as soon as TV's Remington Steele hit the airwaves in the early 1980s, Brosnan's name started surfacing as a possible 007; his debonaire, devilish Steele made him famous but also trapped him in the public imagination as an aloof sex symbol. Only now that the Bond producers have moved on to greener actors does Brosnan get a chance to make audiences remember that he was also quite funny and really very interesting as Steele. His Noble is an oversexed lounge lizard with one whopping whiff of desperation, a man of action whose vocabulary consists largely of colorful, off-color metaphors and allusions. He's crass, he's crazy, and he's really quite companionable. At least Kinnear's wide-eyed Wright seems to think so. And the particular magic of The Matador is that we understand why.

Fledgling director Stewart hews a pretty conformist indie film line; his movie looks (and sounds) like a thousand other almost-underground caper flicks. The difference is that Stewart manages to make his film feel different, showing a deft touch and a sense of risk that births a trio of memorable performances. Not since Wes Anderson's Bottle Rocket (1996) has independent film felt so, well, independent.

It's funny that a film that's all about the evils of high-tech hackery makes you wish nothing less than that some nasty cyberworm had invaded a certain screenwriter's hard drive and consigned this artless mess to an early digital death. At the same time, it's sad that a movie that clocks in at only 1 hour and 40 minutes feels so numbingly never-ending. And that just about sums up Firewall: a miserable joke of a thriller, packed with clichés and cardboard acting. The most interesting part of this movie is the title sequence. See? Funny and sad.

The Stanfield family are all not-so-happy residents of Seattle yuppiedom. Dad Jack (Harrison Ford) is a security specialist working in the banking industry; Mom Beth (Virginia Madsen) is an architect who works out of their impossibly beautiful home on the coast. Kids Sarah (Carly Schroeder) and Andrew (Jimmy Bennett) are spoiled little brats who bicker and whine. You know those early scenes in thrillers? The ones where we see the carefree family going about their everyday business, completely oblivious to the horrors that lurk just around the corner? If we don't even like a family in those first few harmless moments, then what on earth will make us care when the big baddies who want to rob Daddy's bank push through the front door and shove a gun in their faces? The acting in these early scenes is so bad that audiences are afraid of what's to come, all right, but probably not in the way director Richard Loncraine (Wimbledon) and writer Joe Forte intended.

In the case of star Harrison Ford, absence has certainly not made the heart grow any fonder. Maybe he's always been this bad, and it took a break for it to dawn on us. He communicates Jack's distress and intensity over his family's peril by trying to look upset and confused and ends up somewhere between annoyed and constipated. When we can see you "acting," Mr. Ford, that means you're not any good. Ditto for the wildly overrated Madsen, who should thank her lucky stars that she's somehow momentarily escaped the movie-of-the-week purgatory she so richly deserves; her crying jags are so pitiful they belong in a Saturday Night Live skit. The film's one bright spot is Paul Bettany (Master and Commander, A Beautiful Mind) as the film's evil mastermind; he makes his menace meticulously clear, even when the script mandates that he perform dopey, decidedly non-mastermind-y moves.

That's just about all there is to Firewall. A fairly stupid script about hacking into bank accounts by kidnapping the family of the guy who wrote the bank's security software made immeasurably worse by truly excruciating acting. Of course, Ford does eventually find a way to fight back in the film. (He's Ford, after all.) The question is if he can do it in real life after a stinker like Firewall.