A person could consider The Pursuit of Happyness the ultimate American success story. A person could miss one of the film's larger points. 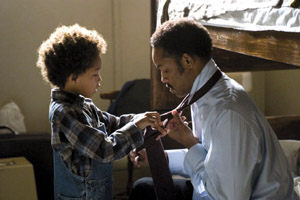 Exiting a full theater after an afternoon screening of The Pursuit of Happyness, I overheard one couple summing up their reactions to the inspired-by-real-events film. The polo-shirt-and-khaki-clad man said, "Well, that's one movie that certainly lives up to the hype." To which his heavily accessorized, perfectly coiffed wife replied, "It's a great American story." Well, yes and no.

It would be a shame if the majority of audience members walked out of the Gabriele Muccino-directed film feeling self-satisfied with the happy ending. The rags-to-riches tale of a San Franciscan named Chris Gardner is undeniably inspiring and ' on one level ' celebrates a free-form society where it's still entirely possible to go from less than nothing to more than something in the space of a day, a year, a lifetime. It is the story of a determined man who rolled his dice on the longest of shots and ended up hitting the jackpot.

And yet, The Pursuit of Happyness (don't worry ' the errant "y" is promptly explained) also is the story of one family who was doing everything they knew how to do ' working double shifts, going without whenever they could ' and yet were still behind on what they owed the landlord and the government. It's the story of hard workers who were always a few steps away from fundamental freedom, chained as they were to the ever-dwindling balance in their checking account.

Chris Gardner (Will Smith) made an ill-advised business investment a few years back. The high-school graduate and Navy veteran invested his life savings in a company that sells portable bone-density scanners, machines that give slightly better images than x-rays at a more-than-slightly higher price. He now spends his days hauling said scanners around the streets of San Francisco, visiting the offices of doctors who seem singularly uninterested in his personable sales pitch. His wife Linda (Thandie Newton) works double shifts at a neighborhood laundry to try to make up for his slow sales. Still, the couple cannot afford to pay their rent, the IRS or the owner of the day-care attended by their son Christopher (Will Smith's son Jaden Christopher Syre Smith).

A chance encounter with a stockbroker plants an idea in Chris' head; he can apply for a competitive internship at Dean Witter and ' by outwitting, outplaying and outlasting his intern competition ' snag a job with the investment giant. He's good with people, he doesn't need a college degree to enter, and the part of his brain that can solve a Rubik's cube in the space of a cab ride is positively on fire. The only problem is that a bitter, broken Linda is done, both with their debts and their marriage. She leaves for New York on the very day that Chris discovers he's been selected to participate in the unpaid intern program. And so Chris and his young son embark on a series of nights spent in low-rent motels, subway-station restrooms and homeless shelters, as Chris struggles to simultaneously sell his remaining scanners and stay ahead in the Dean Witter program.

Steve Conrad (The Weather Man) wouldn't have written a single script treatment of Pursuit if the story had ended badly for the Gardners, so there's no surprise ending here. Conrad writes with humor and pace. What his script might occasionally lack in depth, Will Smith makes up for with a subdued, strong performance that is matched by young Jaden's simple solidity. Their genetic chemistry adds immeasurably to a charming on-screen father-son dynamic.

One of the most striking parts of Gardner's story are the understated moments of casual ignorance. No one at Dean Witter sees his circumstances; everyone assumes that he's living exactly as they do. And yes, Gardner does go to great lengths to cover up his situation, but when a well-heeled fat-cat partner who left his wallet upstairs borrows what we know to be Gardner's last five dollars to pay a cab fare, it's a moment of startling and unintended cruelty. And it's a gentle indictment of a society where we've stopped really seeing the people around us, much less the unfortunate soul sleeping on the sidewalk. We rarely consider other people's realities.

Chris Gardner never set out to be filthy rich; he simply set out to find a life where money, and his lack of it, didn't rule his every waking moment. He worked hard, and he got lucky. But should luck be part of the equation when all we're really trying to do is feed our children and keep a decent roof over our heads? How have we let it become this hard? That's a part of Pursuit that shouldn't be missed.