This IND Styler loves style with meaning. Pieces with a story. It's a rare thing to find it done properly. But, such is the case with DoDo. The brand launched by lux design house Pomellato boasts an extraordinary array of charms (all beginning with that beloved Dodo bird) and this week they'll be rolling out a new stock of them - all aimed at telling your story. 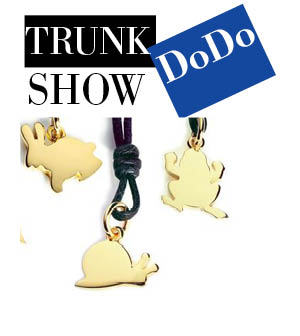 On Thursday and Friday, the gals at kiki will host a trunk show for the beloved brand that's developed a devoted following since the Lafayette store began carrying it in 2007.

"We were the second boutique jewelry stores to offer the line in the U.S.," says Kiki Frayard, who says her favorite charm is the diamond clover.

As for my favorite? It's hard to pick just one but the ones that speak most clearly to me are those like the swan which means "you've grown up beautiful" or the giraffe that says "you stretched and reached your goal" and certainly there's some affection for the donkey that means simply "stubbornly yours."

Stop by kiki Thursdsay or Friday to check out the latest charms, munch on some animal crackers and sip Italian lemonade.