Half flawed, half fabulous, Grindhouse brings B-movies back to the A-list. 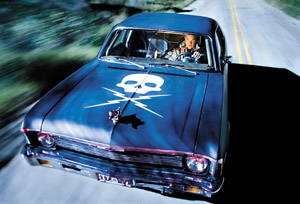 Audacity is an underrated artistic virtue. Of all the elements easily referenced in the volatile chemical cocktail known as art, the idea of the audacious is an ingredient too often left out by its consumers. Maybe that's because complacency is the most common of vices, because too many of us simply want to see what's been seen before or what we already know. The willing, active donning of blinders to the artistically new or uncomfortable could be simple human nature; it could also sometimes justifiably be seen as self-preservation from a culture in which provocation has become almost the only accepted currency of fame.

But audacity is the way art has to be (and the way more entertainment should be). The artists in our midst venture out toward the flat-earth horizon, wanting to show the rest of us the curve that is never there, yet always present; we follow reluctantly or sometimes not at all, afraid of straying too close to the edge. So timid are we that, if our artists weren't occasionally earthshakingly audacious, we probably wouldn't pay much attention to any of them at all. Audacity is how they capture more than just our minds; when they succeed, they make life larger. That's the kind of ax to the frozen sea inside us that Franz Kafka called literature. Audacity is shattering ' and liberating. Without the shock, remember, all that's left is system.

Filmmakers would do well to remember that fact, and sometimes they actually do, commercial concerns to the contrary. Orson Welles, the great granddaddy of them all, is the absolute avatar of the excesses of audacity. He was a mess of a man, a demigod of a director and a catastrophic failure. But he was audacious to the end, his ideas large and his ego larger. He went big, and then he just refused to go home.

Aside from Citizen Kane and Touch of Evil, almost nothing he ever did was expected, commonplace or completely successful. There's something intoxicating about the kind of sure-footed stubbornness that invites self-destruction. In that regard (and in several others), Quentin Tarantino is Welles' troubled, talented heir presumptive.

Who else but this very Wellesian wild child (met and matched by maverick Texas tall-tale teller Robert Rodriguez) would dare, in this day and age, to conceive of a modern-day exploitation-movie double-feature extravaganza? (Not to mention be able to get such a thing made and marketed.) It's a sublimely ridiculous and a ridiculously sublime idea, Grindhouse's mimicry of not just the '70s genres of low-rent action, horror and sex flicks but also of their always slightly seedy presentations. It works brilliantly in form, if not consistently in content.

The first half of the Grindhouse double feature is Robert Rodriguez's gory horror thriller Planet Terror, in which Freddy Rodriguez (Six Feet Under, Bobby) and an automatic-weapon-appendaged Rose McGowan (Scream, The Black Dahlia) fight melty-faced zombies and renegade military men. The only thing more distressed than the set-upon citizenry is the look of Rodriguez's film; scratches and celluloid burns meet missing reels to effectively recreate the grindhouse vibe. In the end, Planet Terror manages to be silly and sick and really kind of sweet. And that's no mean feat.

An insane intermezzo of faux movie trailers from luminaries like Rob Zombie (The Devil's Rejects) and Eli Roth (Hostel) precedes Tarantino's road-rage story Death Proof. And that's when the whole thing comes to a screeching halt. Not much in Death Proof works the way it should; the main car chase scene goes on far too long, and the signature artifice of Tarantino's overly caffeinated, culture-vulture dialogue falls absolutely flat coming from the likes of Rosario Dawson and Tracie Thoms. The best parts of the second half are one spectacularly disturbing car crash and the presence of Kurt Russell as Stuntman Mike, a badass of the Snake Plissken variety who delights in killing women with his car. There's good stuff in Death Proof, like when the tables turn on Stuntman Mike and he loses it, but the worthwhile moments only amount to about a half-hour of Tarantino's alloted 90 minutes. It's not that Death Proof is bad; it's just kind of boring, and that's not a very good homage. Especially after Rodriguez's rowdy effort.

The Rodriguez-Tarantino dynamic is definitely a case of the perceived protege outshining the progenitor. With Reservoir Dogs and Pulp Fiction, Tarantino made it possible for a whole new kind of movie to be made, but the truth is that nothing he's ever done has been as electrifyingly original or specifically brilliant as Rodriguez's comic-noir Sin City. Grindhouse bears out that judgment. Rodriguez's segment is grosser, louder, more artfully filmed and tons more fun. In keeping with his brain-bound tendencies, Tarantino wants his homage to exploitation films to work on a cerebral level. But Rodriguez rightfully remembers that second-rate drive-in B-movies were always all about guts ' literally and figuratively.