Family loyalty is tested in director James Gray's gritty character study, We Own the Night. 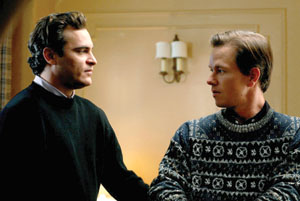 The prodigal son has to face the music and help the family in We Own the Night, a nice showcase for the talents of Mark Wahlberg, Joaquin Phoenix and director James Gray. This is the second time the three have worked together (they all did Gray's The Yards) and it proves to be a worthwhile reunion, with Phoenix and Wahlberg also acting as producers on the project.

The film had been kicking around for many years; Gray hasn't directed anything since 2000. Phoenix plays Bobby, a nightclub manager satisfied with his partying lifestyle and general estrangement from his family of law enforcement officers. Wahlberg plays his brother Joseph, a NYC police detective who has followed in his father Burt's (Robert Duvall) footsteps. Joseph tells Bobby to watch his ass, because they've been tailing a Russian drug dealer who hangs around his club, and a bust is going to happen.

That bust does happen, which sets into play a chain of events that test Bobby's loyalty to his family, Joseph's will to survive, and Burt's love for his sons. These three actors together comprise one of the year's best ensemble casts, and they take full advantage of the situation. None of the actors showboat here. They quietly and subtly convey the dynamics of brothers and fathers in a way that is both convincing and compelling.

Phoenix carries most of the film's weight, and he excels. The movie is essentially Bobby's story. He's not a bad guy, but he does some bad things as a result of stupid decisions. The early scenes he shares with Wahlberg are tense and scary, yet the actors somehow manage to also project that these guys love and care for each other beneath the surface. This brotherly love drives the whole picture.

Some of the occurrences in the film might be considered implausible, but the actors and Gray make them realistic within the film's universe. Bobby's path to redemption could be considered outrageous, but it's definitely an interesting one. The film packs many surprises, with twists and turns that take time to develop. Those looking for nonstop action might be disappointed to discover that this is a character study film. The action sequences are great, but they're very few and far between.

We Own the Night contains the first car chase sequence in recent memory that's wholly original. Gray takes a shootout in the rain and puts you behind the wheel, watching tragedy unfold through the eyes of the character driving. It's a prime example of Gray's versatility as a director ' he can handle the breathtaking human drama, and he's also astonishing with the technical aspects.

Both Phoenix and Wahlberg should have Oscars on their mantles by now. Phoenix was robbed for his performance as Johnny Cash in Walk the Line, and Wahlberg deserved Best Supporting Actor for his work in I Heart Huckabees. The two actors are experts at occupying their roles no matter who they are playing.

This film was booed recently at the Cannes Film Festival, which is baffling. Yes, Gray has a tendency to let his camera linger and is partial to long takes, but there is too much to like about We Own the Night for it to receive that sort of reception. Phoenix and Wahlberg shine, and Gray is a director to be watched.