Stereotypes and clichés loom large and spooky in The Skeleton Key. 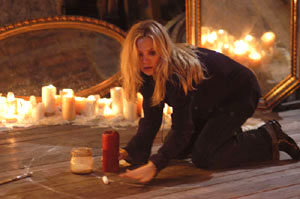 The universe is filled with big questions, questions whose answers are profoundly important and monstrously frightening to contemplate. Are we alone? What happens after we die? Most importantly, who are the bozos that keep greenlighting movies as clichéd and lackluster as director Iain Softley's The Skeleton Key?

Hospice worker Caroline Ellis (Kate Hudson) tires of her work at a New Orleans facility so overburdened and undernourished that it routinely dumps the unclaimed effects of its deceased patients into the bulging dumpster out back. Her spiritual weariness is compounded by the fact that she sits at the bedsides of strangers as they leave this world but wasn't there when her own father died. Quel cliché.

Caroline finds seeming salvation in a classified ad that leads her to the middle of swampy nowhere, to a decaying old mansion inhabited only by a decaying husband and wife (a magnificently silent John Hurt as Ben and a masterfully melodramatic Gena Rowlands as Violet) ' and something really angry in the attic. This being the Louisiana swamp, it follows that the aggressive ghostie (which may or may not have caused Ben's stroke) has everything to do with spells and spirits. Caroline's quest for answers takes her into that Afro-Caribbean otherworld, which apparently lies in the lands just a stone's throw from those I-10 overpasses ' not to mention in the back room of a deceptively innocuous metro-area laundromat. You heard me. The only people she encounters in this world are crazy old people, freaky-deaky French-speaking gas station attendants and a smarmy Southern lawyer (Peter Sarsgaard). Stereotype much?

Hudson, improbably Oscar-nominated for Almost Famous, does a decent acting job in the film's climactic 10 or so minutes, but she's rather uninteresting the rest of the time. Hurt and Rowlands, however, are as delicious as Hudson is dull. Hurt's stroke victim provides all the film's fear, while Rowland gleefully reinforces the impression that, when she's trying, she might very well be the scariest person on the planet.

The film is at times gorgeously shot if sloppily spliced together. Softley (K-Pax, The Wings of the Dove) knows how to create and capture atmosphere, especially early on in the creaky, creepy upstairs of the house. But the difference between a shot of Hudson on the streetcar and a shot of what she supposedly sees from the window of said streetcar is the difference between dazzling digital and shaky Super 8. It's a jarring, unnecessarily amateurish visual.

Annoying hoodoo premise aside, writer Ehren Kruger (Scream 3) actually manages to keep us in suspense for a while, but his storytelling starts slipping pretty early on. The center can officially no longer hold once a hysterical Hudson paddles down a swollen bayou in a pirogue in a driving rainstorm in order to escape events taking place at the big, bad house. It's as laughable as it sounds. When it comes to Louisiana's cinematic portrayals, a stereotype is one thing; this kind of silliness is something worse all together.

The latest film from Oscar-nominated director Fernando Meirelles (City of God) is a smart, exceptionally well-acted and interestingly filmed tale that intertwines the political and the personal. Based on a novel by John Le Carré, The Constant Gardener is the story of Justin Quayle (Ralph Fiennes), a boring British bureaucrat whose tempestuous and perhaps ill-suited aid-worker wife Tessa (Rachel Weisz) dies under mysterious circumstances in their adopted country of Kenya. Justin's final act of fidelity to his enigmatic wife is to seek the truth about her death, an inconvenient plan for his political masters and for the rapacious pharmaceutical companies Tessa apparently spent her last days investigating.

Spurred by rumors of an affair and haunted by the idea that he never really understood Tessa, Justin ' the gardener of the film's title ' begins to turn the earth, looking for answers. The details of Justin's dangerous discoveries, however, pale in comparison to Fiennes' passionate portrayal of a man who's lost everything but has perhaps found his purpose. Weisz, whose Tessa must capture our imagination mostly through a series of flashback scenes, centers the film brilliantly. With strong performances all around, Meirelles' decidedly indie vibe and cinematographer César Charlone's rich African tableaux infuse this otherwise slow film with a tragedy and a beauty that are hard to resist. In the end, the film ' like its awakening protagonist ' goes somewhere beautifully unexpected.