A History of Violence brings mayhem to Middle America. 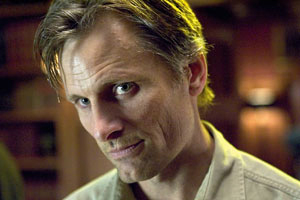 Director David Cronenberg writes short stories on the big screen. Barely longer than chapters, yet deeper and more difficult than many a hefty tome, short stories are tiny triumphs of claustrophobia and complexity. Everything connects, and everything counts. Reality is distilled; reality is distorted. Truth seems just around the corner.

At their best, Cronenberg's films traffic in these same narcotic niceties. His most compelling efforts ' Dead Ringers, M. Butterfly, Spider and now A History of Violence ' deliver a level of ambiguity and impenetrability, a whiff of wit and dread, all reminiscent of the spare prose of O'Connor, Poe and de Maupassant. The only difference is that the auteur-artiste filmmaker's brilliant poetry isn't on a page; it's in a series of meticulously planned and filmed snapshots, a painterly vision partnered with a disturbing, nuanced narrative sense. Read a selection of short stories; watch a Cronenberg film. The eccentric, introverted director seems to achieve a similarity between the two forms almost without effort, and that is why he remains one of the most stunning, if one of the most flawed, filmmakers of our day.

It follows, then, that if Cronenberg can make even a Stephen King novel seem smarter (the underrated The Dead Zone starring Christopher Walken), the director's usual esoteric effect is surely only heightened by the source material of his new film: the graphic novel A History of Violence. Original, intelligent screenwriting seems to have largely bitten the dust as of late, so thank heavens for the still-percolating, enlivened world of the graphic novel. Think Road to Perdition, Sin City, Batman Begins, each an intelligent, well-made film full of life and innovation and each based on, you guessed it, a glorious glorified comic book. Wasn't it only a matter of time before a fringe director like Cronenberg discovered today's pulpiest fictions?

Originally penned and inked by John Wagner and Vince Locke, Violence was adapted (and modified somewhat) by screenwriter Josh Olson. The film's opening shots of the brick exterior and shadowy screen door of a slightly run-down roadside motel room set the visual tone and patient pacing of the rest of the film: colorful close-ups, leisurely camera movement, a sense of uncertainty, beautiful framing. Two tired, vaguely menacing men (Stephen McHattie and Greg Bryk) exit the door, preparing to check out; it doesn't take long to figure out that a credit card will not be their preferred method of payment. And just like that, Cronenberg confronts the audience with a calm, chilling cold-bloodedness that puts the rest of the film's actions ' and reactions ' into play.

Cut to the Stalls, a small-town family living an idyllic existence in the idealized community of Millbrook, Indiana. Mom Edie (Maria Bello) and dad Tom (Viggo Mortensen) are so obviously enamored of each other that it's honestly kind of gross. Teenage son Jack (promising newcomer Ashton Holmes) is such a good big brother to Sarah (Heidi Hayes) that he doesn't grumble when she wakes up in the middle of the night screaming about monsters, but instead readily joins a family group hug to comfort her. The perfect picture is shattered one night, though, when our two friends from the roadside motel show up at Tom's diner and start making trouble. At first, Tom reacts like the solid, stand-up citizen we believe him to be; things take a nasty turn, however, and suddenly our mild-mannered protagonist has all the moves of a man with a darker past. The town lauds Tom as a homegrown hero; the mob (personified by a disfigured Ed Harris at his most malignant) comes looking for him, calling him "Joey" and alluding to a violent history.

As always, Cronenberg coaxes excellent performances from his actors, fascinated as he is by the interplay of perception and reality, the strange tango of fiction and truth. The twisted tale of Cronenberg's truly excellent headscratcher Spider centered on Ralph Fiennes' sputtering solipsism. M. Butterfly, an underrated gem of modern American movies, succeeds on the languorous leniency of Jeremy Irons' self-deception. Along the same lines, Mortensen's situational distress always seems to hide a hint of duplicity, just enough of an edge to make it interesting. It's an amazing act of ambiguity from a still-under-realized talent best known for the bombast of the Lord of the Rings trilogy. In supporting roles, Ed Harris lifts his cameo to central character status on the strength of a sneer, and William Hurt, as a benighted mafia kingpin, deftly twists some of the film's final scenes.

In the end, Cronenberg's discussion of violence and its unintended consequences is as impressionistic as his artistic style. Certainly, he means to comment on a culture that constantly flirts with the very violence it pretends to shun. But he is careful to introduce violence at every level and in the service of every cause: the early carnage of the motel killing spree, Tom's heroic stand that night in the diner, the upset of a family imploding under pressure. Cronenberg is not passing judgment; with a refreshing absence of dogmatism, he's simply observing what happens when he pokes the problem with a stick. What we are left with is open-ended, uncertain and interesting. Because for every kind of heinous act he shows us, for all the blood and guns, it's impossible not to walk away most disturbed by one kind of violence in particular, and that's the violence of a lie.