A crummy book has been made into a mediocre movie. Can we all move on now? 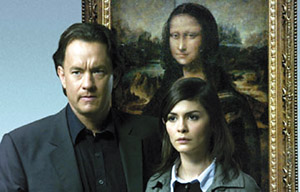 There ought to be an 11th commandment dictating that badly written, bestselling books do not get to spark international religious controversies. It's offensive enough that they all too often grow up to become blockbuster movies. Must they also be argued in the public forum by poets, pundits and saints?

Apparently so. Author Dan Brown's stilted, sophomoric prose and plotting might have been quietly consigned to the dustbin of history ' indeed, to more ordinary dustbins the world over ' had he not created an evil-genius genre: the blasphemous beach read. First published in the spring of 2003, The Da Vinci Code delves into one of religion's greatest mysteries, the identity of Jesus. More specifically, his dual identities: God and man. It is a subject about which unbelievers have raged and believers have marveled for centuries. With the advent of Code, serious contemplation became water-cooler conversation. If Jesus was fully man ' or just a man ' is it possible he married and had children? And if he did, what happened to that blood line? And won't we all end up some place very, very hot for even asking these questions?

Code really didn't crack open anything new; Brown breaks no new ground for anyone who's been paying attention. He simply rehashes titillating bits of history and mythology, showcasing them in the greatest treasure hunt story ever told. But something about his trifling little paperback ' you can read it in one sitting and feel smart and vaguely naughty ' captured the public imagination, making it nothing short of a kind of Harry Potter for parents.

Still, the book only felt the beginning of any backlash. When word came out that director Ron Howard (Apollo 13, A Beautiful Mind) planned a big-screen adaptation, well, that's when all hell broke loose. Boycotts, protests, and ' horror of horrors ' hours and hours of cable channel programming rife with cheesy historical reenactments and a complete cast of Biblical figures, Knights Templar, Priory of Sion members and Opus Dei apologists. Could nothing stop the madness?

Here's hoping Howard's mediocre movie does the trick. The Da Vinci Code, on screen, loses what could best be termed the breeziness of Brown's "writing." It is plodding, overly explanatory, derivative and dull. The talents of good actors go virtually unused. Strangest of all for an artist of Howard's considerable heart, the film seems cold, detached and unemotional until its final minutes. Ultimately, the man who miraculously made Apollo 13 a nail-biter couldn't make the novel we'd all read interesting to us again.

The film opens in a darkened gallery of the Louvre. A shadowy figure chases an aged scholar past the paintings and portraits. The figure ' an albino monk named Silas (Paul Bettany) ' extracts a secret from the scholar and then shoots him. The scholar doesn't die, though, until he leaves a message, a code, written in his own blood on and around his own body.

Harvard symbologist Robert Langdon (Tom Hanks) thinks he is called in as a consultant on the murder but soon finds himself on the lam with French cryptologist Sophie Neveu (Audrey Tautou). Neveu is the scholar's granddaughter; Langdon is suddenly the main suspect in his murder. She is convinced that, together, they can solve the riddles and discover the true murderer's identity. And oh so much more.

Hanks plays Langdon like a humorless, clueless clod; maybe the new hair was distracting him. Tautou is not much better, although perhaps it's hard to really act when your character is repeatedly forced to state the obvious. The pulse of the film quickens with the introduction of Ian McKellen's irascible Sir Leigh Teabing, Holy Grail scholar and eccentric Englishman, and Jean Reno as the Javert-like Captain Fache leaves audiences wanting more of his Gallic intensity. As the homicidal man-child Silas, Paul Bettany (The Reckoning, Master and Commander) continues to cement his reputation as an up-and-comer.

But even these moments of fire are eclipsed by Akiva Goldsman's exposition-heavy script and Howard's paint-by-numbers direction. It can be hard to make word and number riddles come to life visually, granted, but Howard did do it once before. We know you won an Oscar for A Beautiful Mind, Ron, and deservedly so, but when your new film's most striking visual ' floating, glowing snatches of code ' is a blatant lift from your lauded film, that's just lazy. Even more off-putting, Howard never manages to pull the audience into the thrill of the chase; boxing himself in too faithfully to Brown's crummy constructs, Howard can't create the action and the characters at the same time. Everything suffers for it.

Howard does manage to find his feel in the film's final moments, a quiet scene with Hanks, a starry sky and a disappeared disciple. It's a better ending than the film ' or the phenomenon ' deserves.