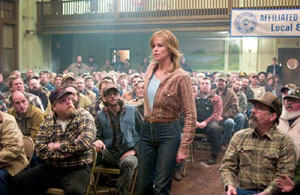 It somehow seems cynical to criticize North Country, a serious film tackling a serious issue. Throw in the fact that the film is inspired by a true story ' that much of what we see (and more) actually happened to living, breathing women ' and it gets even harder. But if North Country is well-directed for the most part and superbly acted all around, Michael Seitzman's script still somehow manages to make fiction feel significantly less interesting than truth. North Country's flat formulas feel more like a movie of the week than any cinematic successor to Norma Rae, Silkwood or Erin Brockovich.

Seitzman worked from the prosaically titled Class Action: The Story of Lois Jensen and the Landmark Case That Changed Sexual Harassment Law. In the book, authors Clara Bingham and Laura Leedy tell the story of the female workers of northern Minnesota's Eveleth Mines, a group of women who made history in 1984 when they were the first to sue their employers for sexual harassment. Seitzman improvises from there, creating characters and situations "inspired" by actual events.

It's Christmastime, and young Karen (Elle Peterson) sits silently on a worn sofa undressing a Barbie doll. The window above her head is filled with the glare of snow, a scene that soon gives way to a swerving car ominously approaching the house. Mother Josey (Charlize Theron) almost wordlessly commands the daughter to leave the room, bracing herself for the fury about to walk through the door. Director Niki Caro (Whale Rider) jumps time brilliantly, hiding the violence but not its gory aftermath; we next see Josey picking herself up off the floor, blood smeared across her battered face.

As Josey takes Karen and her son, Sammy (Thomas Curtis), and begins to make her way home to her parents (Richard Jenkins and Sissy Spacek), the film fast forwards to her eventual day in court and begins to reveal pieces of her past. Her children were born out of wedlock. She doesn't know who Sammy's father is. She has a troubled relationship with her father. With these notes lingering in the silence, Caro cuts back to the action and resumes a more chronological flow. It's an intelligent technique, one she uses more than once and one that sets the film up for a level of complexity that it sadly does not sustain.

Back at home, Josey struggles to support her children washing hair at a beauty salon when an old friend (Frances McDormand) tells her the mine is hiring ' and paying six times what she's making now. Over the resistance of her parents, Josey signs on at Pearson Steel and Taconite, where she soon discovers that her parents aren't the only ones who believe mining is man's work. The battered wife becomes a battered woman, alternately fondled, reviled and physically intimidated by many of her male coworkers. And the day she says no is a day that ultimately changes the American workplace forever.

Actors have long known that while beauty is only skin-deep, ugly goes straight to Oscar. Theron benefited from this Tinseltown truism in 2003, winning for her shocking physical transformation and superior portrayal of serial killer Aileen Wuornos in Patty Jenkins' unvarnished Monster. Maybe it's the unbounded rawness of that performance that makes it seem like Theron's trying a bit too hard here ' dab a little taconite dust on the cheek, pull on the frumpy jumpsuits, have a few Norma Rae moments, snag another gold statue. She does deliver many moments of palpable emotion and solidifies her status as one of today's leading talents, but too many other moments are mired in melodrama and cliché. Her potential is held in check by her material.

And that's not just Theron's trouble; the whole film feels that way. From the insidious indifference of Pearson executives to the ultimate courtroom showdown, North Country skates along the icy surface of its biggest issues. Like 2003's messy-but-interesting Mystic River, this film mistakes proximity to grown-up themes for actual storytelling maturity. And like Mystic River, stunning performances languish in this weird narrative limbo. Theron makes Josey a wonderful, proud victim, even as the film elevates her to sexual-harassment sainthood. The incomparable Richard Jenkins (Six Feet Under) plays the disappointed, disapproving father with an understated magnificence, even as the film prematurely takes away his fury. Frances McDormand (Fargo, Laurel Canyon) turns one sob into an Oscar-worthy performance, even as her character becomes the worst of all possible pawns in Seitzman's emotional manipulations.

Yes, this awards season, North Country will be all the rage. And the actors and the crystalline cinematography of Chris Menges (The Killing Fields, The Mission) definitely deserve their due. The script and direction, however, are all over the map. Scratch the surface, and there's little worth mining here.