No paean to populist politics, writer/director Steve Zaillian's All the King's Men is a stately, sad portrait of a power-hungry man. 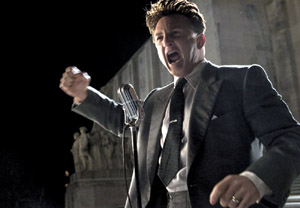 Power, not unlike war, is a force few in human history have ever truly understood. We think we have it, when it, in fact, almost always has us. The dangerous demon of power cloaks its iron-fisted possession of us in velvet whispers of ambition, righteousness and pride. Everyone wants it, in one form or another, and everyone believes in their own particular suitability to its purposes. That's power's most super power, its temptress wiles. Men seem to be just grist for its malicious mill. Power is like love, history, myth. We approach its searing reflection on borrowed time, with melting wings. And yet the annals of history and of fiction are filled with the names of those who have gone to great lengths to try to get it ' and to try to keep it.

Willie Stark was a man who wanted power, and maybe that first wary moment when he viscerally started wanting it was the very moment that he started signing over his soul. In the shorthand of literary pop culture, the protagonist of Robert Penn Warren's Pulitzer-Prize-winning 1946 novel has somehow become synonymous with the tragedy of corrupted idealism. In writer/director Steve Zaillian's respectable but flawed new adaptation of All the King's Men, Sean Penn brilliantly complicates that too-simplistic synecdoche. This Willie is a willing participant in his own dissolution. The corrupt political system he bucks and then becomes part of doesn't really change him ' maybe it simply allows him to become a truer version of himself.

Stark starts as a small-town treasurer who bravely protests a school-building contract awarded and inflated to benefit city officials. When a fire escape on the school subsequently collapses and kills three children, Stark is seen as a savior, a shoe-in for higher office. Approached by state power brokers ' or, rather, by their flunky Tiny Duffy (James Gandolfini) ' Stark declares for governor. Only after miles and miles of handshakes and stump speeches does it accidentally come to his attention, thanks to compromised campaign worker Sadie Burke (Patricia Clarkson) and sympathetic journalist Jack Burden (Jude Law), that he's not really a player in this election, only a pawn, lured into the race to split the poor white vote, assuring another man's victory.

The knowledge sparks an angry zeal in Stark that carries the self-described hick all the way to the governor's mansion, as he stirs the poor from their stupor with his promises of the schools, roads and hospitals they so desperately need. Stark is more a spiritual brother to Andy Griffith's Lonesome Rhodes (Elia Kazan's A Face in the Crowd) than he is a compatriot of Jimmy Stewart's earnest, Washington-bound Jefferson Smith. Stark's a bully and a cheat, a blackmailer and a thug. He's a blunt knife in a drawer full of scalpels. It doesn't matter that he tries, in his way, to help the helpless because anger and power are his truer motivations. And his inevitable demise surprises no one but himself.

Writer and director Steve Zaillian ' who scripted and helmed Searching for Bobby Fischer, but is perhaps best known for his Schindler's List and Gangs of New York screenplays ' does a yeoman's job wrestling Warren's purple, people-eating prose to the mat. His script is at times oddly structured (some of his early time warps are confusing), and dialogue occasionally drifts toward Shakespearean opacity. But King's Men is a notoriously complicated novel, and Zaillian's version, while slow, remains stately. The story's inherent difficulties are mediated somewhat by his artful direction, the bourbon-rich cinematography of Pawel Edelman (The Pianist) and the power of Penn's performance. Zaillian knows how to create visual drama, and Edelman feasts on south Louisiana's moss-laden trees, dirty Main Street windows and ' especially ' the Deco façades of the State Capitol in Baton Rouge. The duo create an epic stage for Willie Stark, who struts across it with sound and fury.

In truth, none of the characters are written particularly well; they're sketches, not fully realized portraits. Kate Winslet's Anne and Mark Ruffalo's Adam seem almost too slight to even be the major plot points they become. Clarkson tries a bit too hard to bring sass to her brassy Sadie. Law's Burden is a mistrustful moth to Stark's flame; the reserved Brit struggles against type, managing moments of tangible inner conflict and surviving several lovely scenes with the leonine Anthony Hopkins.

But Penn is what makes the movie work. He's a bantam fighter, his words crowding in his mouth, his stubby arms pummeling the air. It works, this small-man Stark, because Penn makes his anger and rough charm so oversized. But what is most stunning is the subtlety of the shift he creates in Stark; no idealist stares out at Tiny Duffy in that first meeting of the minds. Calculation flits across Stark's features, his eyes smarter than everyone else's. He sees the power in the room, and he begins to covet it. And just like that he is his own man no more.