The Mist is clouded by a horrendous performance from Marcia Gay Harden. 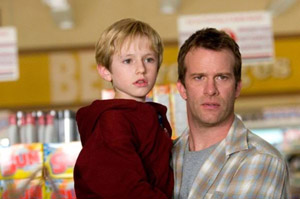 When the first sign of trouble in the new adaptation of Stephen King's The Mist appears, it gets scary fast.

After a storm blasts out a few windows and a boathouse, David Drayton (the film's protagonist, played by Thomas Jane) watches the hills beyond a lake as a strange mist rumbles down toward the water. It strikes him as odd, and it most certainly is ' it also looks really cool and creepy.

David thinks it's just a strange fog, and it quickly loses his attention. He grabs his son, Billy (Nathan Gamble), and his crotchety lawyer neighbor, Brent (Andre Braugher), and they pile into his car. They head to town to grab a few after-storm necessities and, perhaps, take a small break from the partial ruins of their homes. While inside a supermarket, Dan (wonderful character actor Jeffrey DeMunn) runs into the store just ahead of the still-rolling mist, screaming that something carried his friend away.

As it turns out, the mist is full of strangely mutated bugs, octopi and huge dinosaur-like insects that have a taste for human blood. The townsfolk don't have any explanation for what's going on; they just know they have to deal with it, and deal with it now. At this point, the film is still scary.

In the Mist is directed by Frank Darabont, the man responsible for The Shawshank Redemption and The Green Mile, two fine King adaptations. It's interesting to watch Darabont tackle some more straightforward horror fare from King, and he proves he's capable of handling some of the spooky stuff.

When the monsters are attacking people, the movie can be fun, although the CGI effects are spotty. There are moments when the computer-created monsters seamlessly merge with their human counterparts; there are also moments that look quite bad, where either the monsters look like cartoons, or the actor and CGI don't synch up well. By Hollywood standards, this flick was pretty cheap, and at times, it shows.

The human interplay, however, gets way out of hand and silly, to the point of severe distraction. The sloppy effects can be forgiven, but not Marcia Gay Harden. She takes on the role of Mrs. Carmody, a fire-and-brimstone-preaching townie who believes that the monsters are harbingers for the end of days. She thrusts her Bible into the air and beckons the townspeople to choose sides, and she is the most annoying movie character of the year, right up there with the breakdancer Jamie Kennedy played in Kickin' It Old Skool.

Darabont wants to show how humans react in panic situations, but people like Carmody are mostly in the imagination of screenwriters and actors. Still, there are performers out there who could have made Carmody a fun, outrageous character. Harden just makes her a loudmouthed bore and every time she talks, you'll wish she would just shut up.

Jane is actually quite good in the main role. This is an accomplished actor who keeps showing up in movies that don't cut it (The Punisher, The Sweetest Thing and Dreamcatcher, another Stephen King misfire). He makes David a sympathetic character who we can root for in between the moments when Harden is puking dialogue. Supporting characters played by Braugher, DeMunn, William Sadler and Toby Jones are also decent.

The Mist's doomsday scenario is satisfying, and even with the subpar effects, there should be a lot to like about this movie. But with Harden, it's a burden to watch.