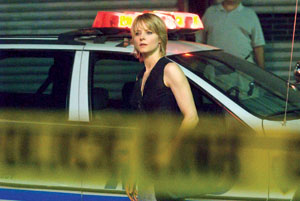 There is a seed of a smart movie buried somewhere inside The Brave One, fighting for the surface and failing. Pedigreed as the victim-turned-vigilante film is ' the roundly respected Neil Jordan (The Crying Game, The End of the Affair) directing A-list stars Jodie Foster (The Accused, Silence of the Lambs) and Terrence Howard (Crash, Hustle & Flow) ' audiences most likely expect an intelligent tweaking of the age-old tension between the ideal of justice and the immediacy of revenge.

And who could blame them? It's a topic heavy with intricacies and conflicts, a set-up for a superb cinematic conversation. After all, it honestly doesn't seem naturally human to forgive, to place the criminal wrongs done to us on the altar of civilized society, surrendering personal judgment to impersonal system. Does the fact that we routinely do so make us more ' or less ' than we should be? Is it possible that an eye for an eye is the clearer vision it sometimes appears to be? And if we all think about doing it, about crossing that razor's edge, why do only some?

Scripted by relative unknowns Roderick Taylor and Bruce A. Taylor and HBO's Tell Me You Love Me scribe Cynthia Mort, The Brave One manages to miss all of those terrible, lovely notions, soft-focusing instead on the opacity of one woman's response to a vicious crime. Somewhere, even that more facile, less compelling story loses its way, even more so than the petite protagonist who is so violently thrust into a shadow world and unapologetically decides to remain there. The Brave One, it turns out, isn't very brave at all, just intermittently interesting.

Public-radio essayist Erica Bain (Foster) is unafraid of her city. She stalks its rhythms, microphone in hand, recording the ebb and flow of its movements to use as backdrops and inspirations for her melodramatic monologues about its cosmopolitan soul. She is happy, narcissistically so, as she strolls her twilit street arm in arm with her doctor fiance David (Naveen Andrews). Her evening dream turns darkest nightmare, however, just inside Central Park's Strangers' Gate. A band of thugs accosts the dogwalking couple, mere menace quickly spilling over to mayhem. The savagely beaten Erica awakes from a coma three weeks later to find that David has died.

Swallowed by the system ' well-intentioned cops probe fresh wounds with their questions and platitudes ' and afraid at first to venture outside her now-claustrophobic apartment, Erica does something not all together unexpected for a survivor of such brutality: She buys a gun. Somewhat more surprisingly, she buys an illegal firearm from a street vendor, a desperate leapfrog of the mandatory 30-day waiting period. Most staggeringly, she then begins to use the gun, first in a caught-in-the-moment kill-or-be-killed convenience store shoot-out and then later in more premeditated situations. She begins to search out the scum of her city and metes out her battered brand of 9-mm justice. Along the way, she accidentally befriends a frustrated-but-faithful police detective (Howard), who is intrigued by her survival and increasingly suspicious about her state of mind.

By showing the sickening detail of Erica's assault, The Brave One seeks to create instant sympatico with her actions. And the first killing ' when she is caught in the crossfire of the deadly domestic depute in the corner grocery store, her own traumas still fresh ' seems visceral and real. After that, the only explanations for her continued actions that we receive are Foster's chilly stare and taut jaw, a few mumblings about how awful it feels to return to one's own life as a stranger and an Emily Dickinson poem in voiceover ("Because I could not stop for Death"). The anguish of Erica's death-in-life is only in Foster's intensity; none of it is poured out on the page. And so, each time she kills in this cartoonish Mad Max metropolis of a city that she inhabits, her character ' and her agony ' recedes a little more, until she's reduced simply to a gun with a grudge. Subsequently, we stop caring long before she does.

The Brave One does have its merits, fleeting as they are: the thoughtless brutalities of a well-intentioned law-enforcement bureaucracy, the gallows humor of a worn-down cop (the always engaging Nicky Katt), Howard's empathetic ease with Foster's fragile character, the unexpected subtleties of Jordan's trademark moodiness behind the camera. But the final verdict, after a slow and simple two hours that fizzles into the most contrived and cloying of endings, is that neither Neil Jordan nor Jodie Foster was exactly needed to deliver this kind of a simplified action-anti-hero stereotype, even if, for once, it's a woman who is walking tall.