Jolie's Augello, assisted by Gus Anderson with the George Rodrigue Foundation, chose Vermilion snapper, which he hand-braised with baby heirloom tomatoes and a roasted garlic fume.

Chefs Manny Augello of Jolie's Louisiana Bistro and Dustie Latiolais of Crawfish Town USA in Henderson were among the 10 chefs from around the state selected by the Louisiana Seafood Promotion and Marketing Board to compete for the King of Louisiana Seafood crown.

The chefs were given one hour each to prepare their dishes on-site at the New Orleans Convention Center while hundreds of Wine and Food Experience attendees gathered to watch the culinary creations come to life. The cook-off was held in conjunction with the Wine and Food Experience's Grand Tasting Event in which hundreds of New Orleans restaurants and bakeries set up alongside countless regional and national wineries to serve wine, spirits and food samples to the record crowd. 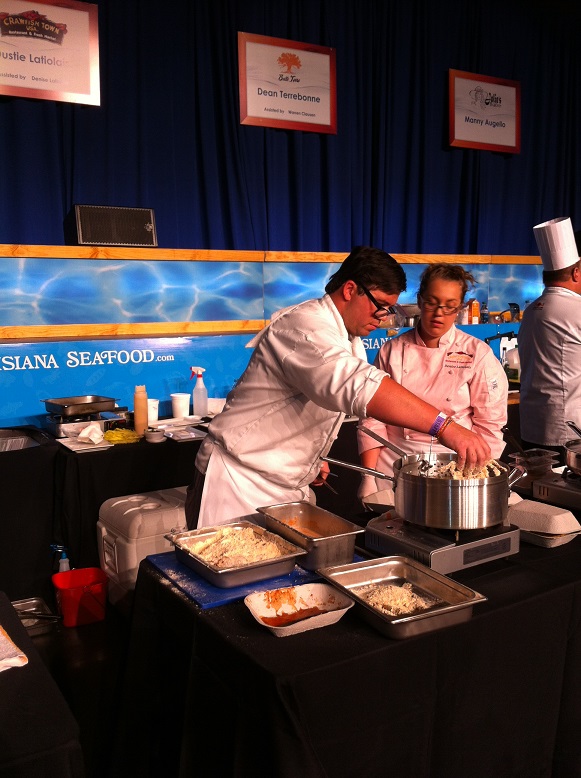 Latiolais and wife Denise, his sous chef for the competition, served up Cypremort Point soft shell crabs, fried half with flour and half with a special breading, Latiolais said at Saturday's event. The crabs were double battered for a "crispy coating" and served over a crawfish and tasso corn maque choux.

"I picked the crabs up from Cypremort Point yesterday," Latiolais said. "They were still alive when I cleaned them here today." 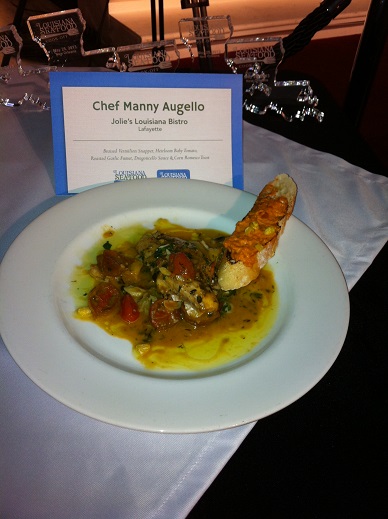 The sauce for Augello's snapper was a chimichurri of garlic, anchovies and tarragon.

Augello and his assistant for the day, Gus Anderson with the George Rodrigue Foundation, chose Vermilion snapper that was hand-braised with baby heirloom tomatoes and a roasted garlic fume, Augello said. The fish stock was "intensified" with Louisiana-roasted shrimp head and served with toast topped with a roasted corn almond romesco. The sauce for the snapper was an exquisite chimichurri of garlic, anchovies and tarragon.

The King of Louisiana Seafood title means Carroll will spend the next year acting as an ambassador and spokesman of Louisiana seafood at various events. He'll also be representing Louisiana when he competes in the 10th annual Great American Seafood Cook-off in New Orleans Aug. 3.

Although the two Acadiana chefs didn't make the winners circle this year, both said they were grateful for the opportunity to compete.