One year ago, LSU had a very disappointing end to its baseball season. (Photo courtesy Taylor Balkom/The Daily Reveille)

BATON ROUGE, La. (AP) - One year ago, LSU had a very disappointing end to its baseball season.

After winning its super-regional opener, the Tigers dropped back-to-back games to unheralded Stony Brook at Alex Box Stadium. There would be no College World Series appearance for LSU, which has won six national championships in the past 22 years.

Now the Tigers are hosting a super-regional again. However, there is no Stony Brook coming to LSU this time. Oklahoma, which is riding an eight-game winning streak, will take on the Tigers in the series that starts Friday night at 6 p.m. 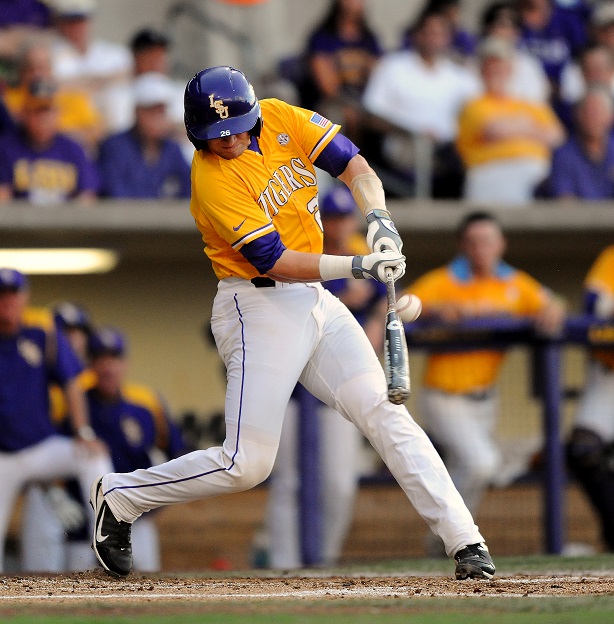 "We have great respect for Oklahoma," LSU coach Paul Mainieri said. "It's like playing another SEC team. I look at it as like we are playing an Ole Miss, a Texas A&M or an Arkansas."

And with good reason.

Oklahoma's starting pitcher Friday will be Jonathan Gray who has a 10-2 record with a 1.59 ERA. He has struck out 138 batters in 119 innings and was selected third overall by Colorado in Thursday night's Major League Baseball draft.

Gray tested positive for Adderall on a major league pre-draft drug screening. However, that positive test will have no effect on his eligibility this weekend.

"Jonathan has handled everything this week like he has handled things all year," Oklahoma coach Sunny Golloway said. "He is a very strong-willed person. He doesn't let things get to him. His will to win is tremendous. That's what makes him special."

Mainieri has seen his share of potential first-round pitchers in the Southeastern Conference this year - Ryne Stanek of Arkansas, Bobby Wahl of Ole Miss and Jonathan Crawford of Florida. But, Mainieri knows that Gray is a special player.

"You don't try to run up his pitch count to get him out of the game," Mainieri said. "But, you do try to get him to be uncomfortable. You don't want him to have easy innings with three quick outs where he can get a rhythm. We have to keep him from getting into that rhythm."

"A lot of people think Gray is the best pitcher in the country," Mainieri said. "I know my guy is 11-0. Nola gives us the best chance to win. They'll go toe-to-toe and duke it out. If Aaron pitches the way he can, it will be a heckuva game."

Golloway knows people who follow college baseball are looking forward to the pitching matchup between Gray and Nola.

LSU is enjoying a record-setting season with 55 victories in 64 games. Only two Tigers teams have won more games - the 1997 (57) and 2009 (56) clubs that won national championships. Mainieri believes this squad is ready to make a run at another LSU national title.

"I have a better feeling this year about the balance of our team," Mainieri said. "We have guys who can slug it and we also have speed. I'm not just talking about stealing bases. We go first to third on singles, we score from first on a double that doesn't reach the fence and we cover ground in the outfield."

Mainieri said the Tigers had their best practice of the year on Thursday.