Behind the puzzling schedule of Parc Sans Souci's fountain. 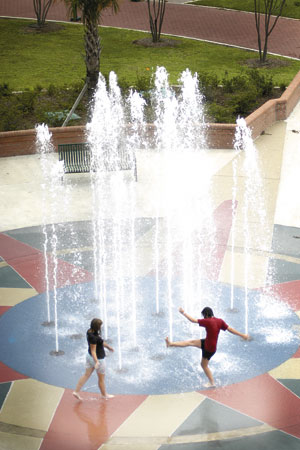 The operation of one of downtown Lafayette's most beautiful attractions ' the fountain at Parc Sans Souci ' has always been a bit of a mystery. The fountain designed by architect Lynn Guidry was turned off for a few months in late 2003, but City-Parish President Joey Durel had it turned back on when he took office. Its operation was sporadic in early 2004, with the fountain's 24 synchronized jets slated to run at lunchtime and during early evening hours on weekdays. During this summer's recent scorching heat wave, the seemingly random nature of the fountain was even more puzzling: why would it be off at noon on a scorching day but on at 7:30 p.m. on a cool night?

For the answer, you have to listen to the wind.

"The fountain's now programmed to run from 8 a.m. to 8 p.m., seven days a week," says Mike McGuirk, maintenance supervisor for the arts and culture division of Lafayette Consolidated Government. "But the fountain's equipped with a wind gauge, and if the wind blows over 14 miles per hour, it shuts down. Then it will check automatically every 10 minutes and come back on if the wind dies down."

With temperatures expected to hover in the 90s through September, it's a good bet the fountain will still be a welcome respite from the heat when Downtown Alive! kicks off its fall 2005 concert series on Sept. 9. Just make sure to check the wind forecast before you bring your bathing suit.