The Townhouse's Al Massa puts his own spin on a venerable eggnog recipe. 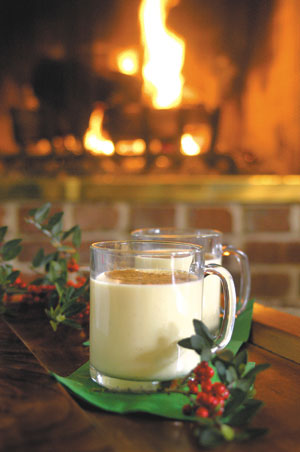 Lafayette Townhouse Chef Al Massa learned to make eggnog using the Esquire Bar Guide from 1956. "When I was growing up, my folks would give a lot of cocktail parties, and I was always the bartender," he says. "The Esquire tradition was that you could have brandy or bourbon or brandy and bourbon. I like rum rather than bourbon in my eggnog. It's really, really thick, and the rum cooks the egg."

Although eggnog is sometimes considered more of a southern drink because of the bourbon, Massa says it originated in the old public houses of England as a way to warm up during cold winters. New Orleans Creoles inherited the holiday custom of making eggnog (along with the popular bourbon milk punch) from their European ancestors and included the drink in their réveillon or awakening feasts on Christmas Eve. According to Chef John Folse's Web site: "Family members returning from church were greeted with an elaborate meal of daubé glace, chicken and oyster gumbo, salmis or game pies, egg dishes, sweetbreads â?¦ wine, brandy, eggnog and New Orleans coffee."

Chef Massa serves his eggnog in chilled glasses and topped with grated nutmeg. "You could almost take a spoon to eat it," he says. "It's so much of a different flavor. It's much fresher and lighter, almost like a liquid pumpkin pie kind of thing. It also packs quite a wallop. The more you drink, the better it tastes."

Beat the yolks without mercy and add the granulated sugar. Add the brandy, in shots, alternately with shots of rum, mixing well. Add 3/4 gallon of the heavy cream, and stir to blend. Fold in six lightly beaten egg whites. Beat the remaining whites until very stiff, add the confectioner's sugar and the remaining heavy cream. Fold into the eggnog mixture. Store in a cool and safe place for 12 hours. Makes 12 servings.

Note: Since this eggnog is made with raw eggs, be sure to use fresh, fresh eggs. People with digestive conditions, young children and the elderly should not be served anything with raw eggs.