A fundraiser for the Friends of the Humanities offers a night with esteemed local musicians while raising money for the Archives of Cajun and Creole Folklore. 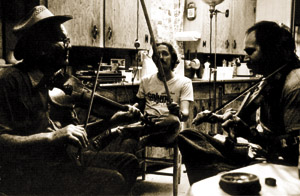 After Barry Ancelet was approached by the Friends of the Humanities to give a lecture about the Archives of Cajun and Creole Folklore at UL Lafayette, he began tossing the idea around with Michael Doucet of BeauSoleil fame. Ancelet says, "We came up with this idea that the archives have served as a recycling plant for a lot of different musicians, going in there, finding some really neat old songs, and giving them new life."

On March 30, Ancelet will give a lecture, joined by Doucet and other local musicians ' including Steve Riley, David Greely, Chris Stafford, Kristi Guillory and Chris Segura. Ancelet will present field recordings from the archives, and the musicians will offer their takes of using the traditional source material for new songs. "One of the underlying messages here is that this is a nice little stash, a bank of resources from our heritage, that has jewels that can be rearranged and reset," Ancelet says.

The Friends of the Humanities was established in 1989, when a group of women taking courses at UL Lafayette was discouraged by the lack of funding for the humanities. "The audio-visual equipment was so pathetic," says President Fifi Billeaud. "The slides were so weak you could hardly see the colors. They didn't even have enough paper to run off copies." Since then, the 250-member group has raised more than $300,000 to support the study of humanities at the university, donating money for an endowment, equipment, books and faculty assistance.

The Friends of the Humanities will also make a $2,500 donation to help fund the continuing work of the archives. "That's indigenous music," Billeaud says. "It's local folklore music. Anything that's created is what the human people do, so we call that the humanities. And the archives' efforts is such a noteworthy one."

The Friends of the Humanities will present Soiree Des Artistes VII on Friday, March 30, at the Petroleum Club in Lafayette. The reception will begin at 6:30 p.m., with a four-course dinner served at 7:30 p.m. and a presentation by Barry Ancelet and musicians at 8:30 p.m. Tickets are $75 each (with tables of eight for $600) and can be purchased by sending a check payable to the Friends of Humanities, P.O. Box 53581, Lafayette, LA, 70505-3581. For more information about Friends of the Humanities, visit www.friendsofthehumanities.com or call 233-5286.