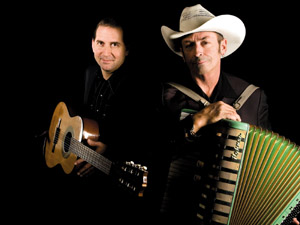 When the Hacienda Brothers released their 2005 self-titled debut, it wasn't much of a surprise they displayed a love of Western swing. After all, the album was the product of southern California songwriters Dave Gonzalez (formerly of the Paladins) and Chris Gaffney and was recorded in Tucson, Ariz. What caught fans and critics off-guard was a sound best described as Western soul.

On tracks like the weeping and leisurely paced "Lookin' for Loneliness" and "Walkin' on my Dreams," the Brothers mined the deep soul and rhythm and blues of the early 1960s with panache. (The record stood out from the play-by-numbers schemes of many alt-country outfits, whose main creativity rests in which mother-of-pearl shirt to wear.) The Brothers' love of classic rhythm and blues was bolstered further by the leadership of producer Dan Penn, co-writer of timeless songs such as "Dark End of the Street," "Do Right Woman, Do Right Man" (made a hit by Aretha Franklin) and "Cry Like a Baby." Penn and the Haciendas have once again teamed up on their new CD What's Wrong with Right?, and the Haciendas (alas, without Penn in tow) debut a fresh batch of songs in Lafayette on Wednesday at Blue Moon Saloon.

Many will delight in the band's covers of Penn's "Cry Like a Baby" and "It Tears Me Up," but the originals stand out for their unique merge of styles. Tracks like the title cut perfectly capture the best of both elements ' weeping steel guitars evoke a smoky western saloon, and the masterfully written lyrics, co-authored by Penn and Gonzalez, are pure old-school Southern soul.