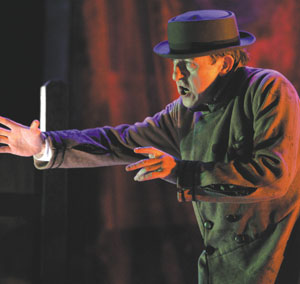 For the Performing Arts Society of Acadiana, hurricanes Katrina and Rita brought unexpected challenges. With its 2005-06 season performances scheduled at the Heymann Center, which is now being used as a special needs shelter, PASA had to juggle its schedule and find a new venue for its fall shows, Hamlet and Csardas! The Tango of the East. The result is PASA in the Park, a free outdoor performance series at Parc International downtown.

The rest of PASA's season has been reprogrammed. BREAK! The Urban Funk Spectacular will take place at the Heymann Center April 4; the United States Marine Band performance was canceled; and Anubhava, classical Indian music and dance, remains as scheduled at Angelle Hall Oct. 26.

In the tradition of Shakespeare's Globe Theater in London and Shakespeare in Central Park, New York's Aquila Theater Co. takes Hamlet outdoors Oct. 12. "It's always been in our strategic plan to start a series of outdoor events in the parks downtown," says PASA's Community Relations Director Natalie LeBlanc. "This was a reason to finally do it. We are encouraging people to bring their own chairs and blankets and we will have concessions. We really want to run this like you would be in a theater, but you'll be outside." If all goes well, Csardas! will follow Nov. 6 with a Hungarian tango troupe including about 60 dancers, performing "in the round."

Performing outdoors won't be an adjustment for Aquila Theatre Co. The group regularly performs its contemporary theater outside around the country, most recently at venues in Pennsylvania and California. "Shakespeare wrote for an outdoor performance," says Hamlet Director Robert Richmond by phone from New York. "There are several great things that happen when it's outside. Our ears work a little harder, and the acting is bigger. You have to be larger than life to reach someone on the back row."

PASA in the Park kicks off Wednesday, Oct. 12, with Hamlet at 7 p.m. at Parc International. Admission is free, but $5 donations will be collected. Call 237-2787 for more info.