Artists Bryan Lafaye and Elemore Morgan Jr. collaborate on a joint show at the Acadiana Center for the Arts. 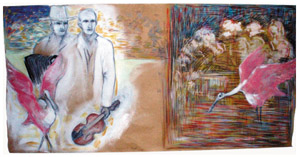 Bryan Lafaye and Elemore Morgan Jr. both paint the natural world of Louisiana. Morgan is renowned for his arcing impressions of the Cajun prairie, dominated by color-infused radiant skies. Lafaye's huge drawings of pelicans, roseate spoonbill, cows and Catahoula hounds create an iconography of wetlands wildlife. So when the two friends decided to collaborate and two male figures appeared in the picture as they were drawing together, they were both momentarily surprised.

Forty-four-year old Lafaye met 75-year-old Morgan in 1994 when he was putting together a show at the Alexandria Museum of Art which featured the photography of Morgan's father, Elemore Morgan Sr. Then Lafaye arrived to run the University of Southwest Louisiana's Art Museum, and curated a major Morgan Jr. retrospective called When Land Meets Sky in 1996. Lafaye describes a never-ending conversation with Morgan that segues from their work based on the Louisiana environment to the mythology of what it means to be Southern. "We talked about the uniqueness of being Louisianians," Lafaye says. "I started a story called Bones Come Home. It's a reflection of all the ghosts that haunt this place, all the things that make Louisiana what it is."

Their first joint show, named Common Ground opened in Jennings in 2003 at the Zigler Museum. Both men work on a huge scale, and the small Zigler could only exhibit a fraction of their output. When the Acadiana Center for the Arts opened in 2004, with its 4,800-square foot gallery, the idea for another joint show was born.

The exhibit features a twist of sorts; Lafaye, who has been working almost exclusively on paper over the past decade, will have some paintings on masonite, Morgan's signature medium, while Morgan will also exhibit some works on paper.

The collaborative title piece, Bones Come Home, is drawn and painted on a large sheet of brown kraft paper. The artists started working on the piece simultaneously. "Just for a few minutes we danced around one another, and then we just started painting on top of each other's work. It was done in about three days," Lafaye says. "We were laughing ' it was like we were painting on a Schwegmann's paper bag."