Champagne by any other name tastes just as sweet. 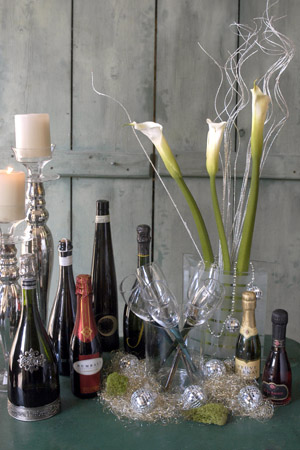 There is no substitute for a glass of bubbly when it comes to drinking in the New Year, but there are a lot of variations on the effervescent theme of Champagne. The word Champagne refers to wines made exclusively within the Champagne region of France, while those from France and other wine-making regions are called sparkling wines. But just because a wine is not Champagne doesn't mean it doesn't bring the same fizzy bounce to celebrations. Some of the great wine regions of the world ' Spain, Italy and California ' produce creations with their own special sizzle.

Sparkling wines from Spain are known as Cavas, from the Catalan word for cave, or cellar. While they are inspired by French champagne and made with the same technique, Cavas are a less complex wine. Lemony and earthy, the wine has less froth than Champagne. Cindy Trahan, wine manager at Champagne's Market, recommends the renowned Segura Viudas Heredad, a Cavas that is creamy and spicy. The custom-made bottle labeled with metal crests and a carved metal base is a find at $20. The Montsarra Cava, $14 from Village Market in River Ranch, is a good buy for the money, with nice citrus notes in a crisp dry wine.

Two of Italy's contributions to the world of bubbly are Prosecco from the Veneto region, and Moscato d'Asti, from the Piedmont, where it is tradition to drink a glass of the young wine at Christmas. Both are fruity wines, delicately sweet and light. Philippe Simon, owner of Philippe's Wine Cellar suggests I Vignaioli Di Santo Stefano, a $19 Moscato in an unusual tall bottle. The De Faveri Prosecco, $16, is a favorite of the ladies of Desperate Housewives as well as the Venetians, who consider it civilized to drink as a pick-me-up in mid-afternoon.

One of the standout sparklers from California is J, $33, from the Russian River Valley. Trahan, Pam Daigle at Village Market, and Pete Stevens from Marcello's Wine Market all recommend J, which they say is in a class with French Champagne. Crisp and toasty, this wine creates events all by itself. A personal favorite, Schramsberg Blanc de Noir, $32, has the heavenly scent of pears. No matter which wine you choose for New Year's Eve, all of them explode with an unmistakable pop ' the sound of celebration.