Cyclists converge on the Bike Barn Saloon in Sunset. 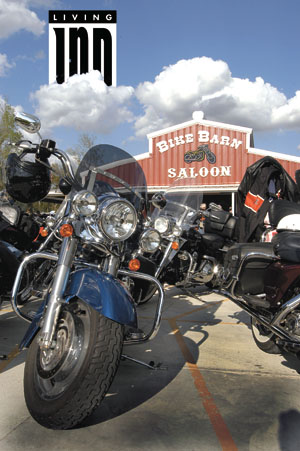 On any sunny weekend, at the midway point between Lafayette and Opelousas on the I-49 service road, the Bike Barn Saloon hosts a convergence of the area's premier classic and contemporary custom motorcycles. "We can park 1,000 bikes," says owner Cy Dodge, who opened up the Bike Barn last December.

"Sometimes we've got a million dollars worth of bikes parked outside," Dodge says. "It's like the beach ' if the sun's out, they're here."

Area bikers clearly appreciate having a new spot in Acadiana. Last week, Dodge was awaiting a shipment of 720 cases of beer in anticipation of the business he expected during the annual state Harley Owner Group rally last weekend.

Bike Barn is already expanding with an outside bar, kitchen and gift shop. The new kitchen will not take the place of Bike Barn icon Pop a Top, who mans the outdoor barbecue pit each weekend serving brisket and sausage to patrons. Pop a Top lost one of his legs in a bike accident on Congress Street, and part of the $3 sandwich cost goes to him so he can buy a new leg and ride again.

Dodge is a Lafayette native who has spent the last 20 years in Panama City running a RV and motor home park. He used to own a local club called The Villa, which burned down in 1985, at the same Sunset location as Bike Barn. "I built this place right on top of the old Villa club," Dodge says.

Even with food and live music on Fridays, the main attraction is always the bikes in the parking lot, which often include classic Indian and Honda models alongside the usual rumble of Harley-Davidsons. But there's plenty of room for automobiles, too. "Everybody's welcome," he says. "A lot of people come and tell me that they don't have a bike, and then the next time I see them they have a bike."