Fly fishing bounces back in Acadiana. 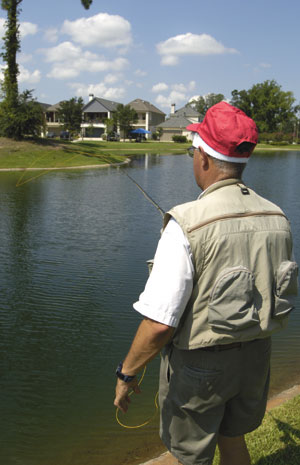 Dennis Vidrine's obsession with fly fishing began as a teenager in the 1950s while living in South Carolina. During frequent walks to his job at the local dry cleaners, Vidrine would pass by a neighborhood hardware store that displayed a new fiberglass fly fishing rod in its front window. "I was from Ville Platte," Vidrine says. "I had never seen a fly rod."

Fifty years later, back in his native south Louisiana, Vidrine now builds his own fly rods and makes or "ties" his own fly lures. As a founding member and current president of the Acadiana Fly Rodders organization, he's helping introduce the intricacies of the sport to locals who might view a fly rod as a foreign object.

"Everyone believes in the myth that if you fly fish you've got to be in a mountain stream somewhere," says Jack Deshotels (pictured), a veteran member of the Acadiana Fly Rodders. "Well in Louisiana, we are not blessed with cold water mountain streams." Fly fishing in Louisiana lakes and saltwater marshes is equally fulfilling for its regular practitioners.

"To tie your own fly, and then to go fool a fish with it, to me, it doesn't get any better than that," Deshotels says. "It's something I created."

And there are no boundaries to where fly rods can be used. While some local fly fishers mainly stick to freshwater lakes and rivers, Deshotels does the bulk of his fly fishing offshore in the Gulf of Mexico. "Anywhere there's water with fish in it you can fish with a fly rod," he says.

A few years ago, he reeled in a 27-pound redfish using a sinking Clauser minnow fly while fishing about 15 miles off the coast south of Rockefeller Refuge. Other local fly fishers attest to the thrill of fly fishing for redfish in shallow marsh areas. "You can see them tailing," says local attorney and Acadiana Fly Rodders club member Bob Boese. "And you sneak up behind them and drop the fly about two or three feet in front of them."

According to Deshotels, who grew up in Mamou, fly fishing has some roots in Louisiana. He learned to fish with a fly rod when he was 5 years old. "In the '50s and '60s, in Louisiana, there were a whole lot of folks fishing with fly rods," he says. People fished their area ponds and lakes with either cane poles, fly rods or a crude casting rod used to fish for bottom-dwelling catfish. But when tournament bass fishing took off in the '70s and '80s, fly fishing was largely forgotten.

"It just kind of faded out, and in the past few years there's definitely been a resurgence," Deshotels says. "Now it's the thing to do. Everybody wants to go catch redfish and trout with a fly rod."

However, fly fishing can require considerably more time to learn than conventional fishing. "Fly fishing is art because there's so much that's involved with it," says Boese. "It's kind of like golf in that if you really get involved in it, all you want to do is get better."

Unlike commonly used fishing rods, which rely on substantive lures and metal sinkers attached to the end of the line to provide the weight needed for casting, fly fishing rods use the line itself to carry out a virtually weightless fly. The line is made up of several parts, but basically consists of a heavier backing line attached to a lighter end, called the leader.

During a cast, the leader plays the critical role of transferring the momentum of the backing line to push out the fly. Before it lands, the line must then be pulled back with a check cast in order for the fly to flip out in front. The leader also works to dissipate the line's energy so the fly appears to land as gently on the water as a natural insect would. More complicated casts allow fly fishers to throw out their line around corners or under low-lying tree branches.

On the first Tuesday of every month at about 6:30 p.m., the Acadiana Fly Rodders practice their art by casting lines out on the front lawn of Grace Presbyterian Church on Roselawn Boulevard. The casting is followed by the club's brief meetings, in which members discuss environmental conservation or other political issues of their parent organization, the Federation of Fly Fishers. Meetings also usually include a brief fly tying demonstration by one of the members.

AFR consists of about 40 dues-paying members, up from the 18 members that founded the club in 1987. Each year, members usually take two group trips, one out to the Gulf area and another up to fish one of the running rivers in southwest Arkansas. The group also organizes a local tournament and a seminar for its members each spring. From 9 a.m.-noon this Saturday, Aug. 6, AFR will be at the pond behind the Crescent Apartments in River Ranch wrapping up a series of free lessons open to the general public.

The club has helped its members push each other to hone their fly fishing skills.

Vidrine says it wasn't until the club began its regular meetings that he really became proficient with his fly rod, which he had owned for more than 25 years. "I had never picked up the skills," he says. "I couldn't cast worth a hoot, but through the club we taught each other."

While club members are more than willing to take the time to teach casting and fly tying to anyone interested in learning the craft, they say most people don't have the patience required to learn the sport. "You spend a lot of time outside of the actual fishing aspect of it," Vidrine says, noting how many people enjoy fishing as a casual hobby with minimum work.

"Anybody can go fish with a bait casting rod and reel," adds Deshotels. "It takes a little more effort to fly fish."