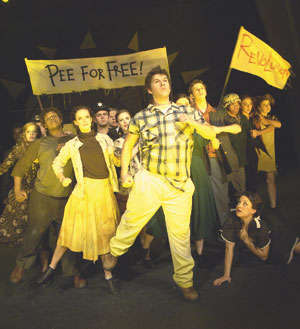 Imagine a society where going to the john without permission is illegal. That's the scenario in Urinetown The Musical, winner of three Tony Awards and currently running at UL Lafayette's Burke Hall Theatre. "The opportunity to use private restrooms has gone away," explains Director Neil Vanderpool, and the water shortage is so severe that private toilets aren't flushable. Amid a 20-year drought, the story also follows the relationship of the daughter of the town businessman who's created the "pay-per-pee" monopoly and a poor boy who ends up leading a rebellion against it.

If the plot sounds familiar, it's because Urinetown combines and pokes fun at popular musicals, like Les Miserables (performed by UL in 2003) and West Side Story. "If you really look at the play, it has snippets of Chicago, snippets of Guys and Dolls. It even has snippets of Hamlet," says Vanderpool. Urinetown began as an off-Broadway production in 1999, hit Broadway in 2002 and was recently released for amateur presentation. Vanderpool says he chose it for the department's fall production because UL would be the first university in the state to perform it and also because of the young characters and musical score. Director of Musical Theater Shawn Roy leads the musical direction, which includes songs such as "Privilege to Pee," and a live combo of UL faculty and student musicians accompanies the show.

"There's a line in the play where a guy goes, 'Worldwide ecological devastation changes a man,'" says Vanderpool. "I think the play is very timely. It really talks about public utilities." But despite Urinetown's somewhat taboo subject matter, Vanderpool says, "It's a very, very charming play, even though the title's irreverent."

Urinetown runs Thursday-Saturday through Nov. 5 at Burke Theatre. Tickets are $12 and $8 for seniors and students and are available at the UL Student Union Box Office or at the door.